Now I understand that for the most part this has been done to death, and I’m extremely late to the party. But I just wanted to say my piece on on the subject because last time I checked that’s what this damned thing is for.

Everyone trashed Lebron for handling free agency the way he did, and I totally understand and agree with that. But  it seemed like he was shocked people wouldnt take kindly to him going on Primetime TV and boring everyone for an hour and then saying he was taking his talents to Miami after leading 3 other teams (New York, Cleveland, Chicago) on. 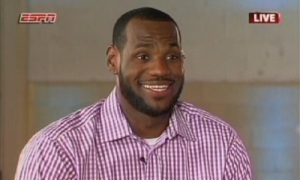 He is so excited to disappoint!

I mean look at the guy, totally oblivious to what is going to come crashing down on him. You can tell he didn’t think in a million years that people would actually rally against him, I mean I’m sure he assumed some people wouldn’t like him (HATERSSSSS) but not to this extent. But that’s what I’m hear to talk about, he completely missed out on an opportunity to just embrace this hatred and just become the bad guy!

And when I say bad guy, I mean an over the top Heel persona. To think every game he comes out and cuts a promo about how he doesn’t care about anyone but himself (which would just be coming from his heart) but to make examples of teams when he buries them. Here’s an example of the sort of things he could do.

Think about that every couple of games him just making an example of fans, and teams. It would be great!  And what if ESPN followed him around and he did things like this?

Could you hear someone who is constantly apologizing for him from that channel? Tim Legler could be heard saying “Well see? That’s what makes him a great all around player! He is always training, even doing cardio in the pool!”

Personally, I would be completely on board with this, because he is already a larger than life tool right now, but what if he were to just embrace it? Just become this crazy outlandish character that belittles everyone?

And the best part? He actually has the talent to back up everything he was doing! Lebron James might be the most talented player I have ever seen (notice I said “talented” not “greatest” Jordan is the greatest NUFF SAID) and if he were to go around ruining days it would only make the times he comes up short that much more rewarding!

How much better would it feel if Lebron was this evil person and the Heat were choking away 24 point leads like this? If they were missing last second shots constantly (which they are)? The fact a team that was touted as breaking the Bulls 72-10 record might not even win 60 games?

It would make it so much better, because, in a way, to see a guy who only wanted to play with his friends fail like this just seems sad.

One thought on “How Lebron Screwed up.”