If you couldn’t tell from the title, we video game players, gamers if you will, are a passionate bunch. Since the stereotypical gamer ventures forth into the dating world at a crippled pace, we are forced to pour our hearts into video games. Much like romance and relationships though, video game relationships can go bad too. They can seem so great on paper with their flashy graphics or new concepts, but it is not until after you have spent your money and time that you realize that your new object of affection was nothing more than a smooth talking con-artist. You walk away scarred from the experience, slightly more wary the next time around. Hopefully you learn your lesson and don’t experience the disappointment again. Unfortunately, there are times where a game is so deceitful and evil, that it doesn’t just break your heart. It rapes you. Sometimes a game will lure you in, get you to feel comfortable and safe, only to take advantage of you. Now that I am an adult, these assaults rarely happen to me anymore. Most of my video game rapes happened to enthusiastic youth. As we all know, it’s much easier to rape a child than an adult and those dirty developers know it. I’d like to say that I am smart enough not to let this happen to me anymore but I’d like to start with a very recent video game rape that happened to me just last week.

As an unemployed student schlub, I find myself with a lot of free time so anything that can take my mind off of my depression is a good thing. So when my DRUG PUSHER friend Burger came around and told me of Backyard Monsters on kongregate, I started playing it and was immediately addicted. The game isn’t for everyone. You are in charge of a small town that produces monsters that you use to attack other players. You mine resources and build a bigger city. As you go along, you upgrade your buildings and monsters which can literally take days. It’s not a fast paced game but it is engaging enough to waste hours of my life. There is one particular building called the Map Room that allows you to view and attack other players. Once you get to a certain level, you can upgrade this Map Room to allow for you to actually expand into other territories much like Sim Ant. This. Takes. Weeks. So after weeks and weeks of building and scrounging pebbles and twigs, I finally built my Map Room 2. The upgrade finished in the morning so I dicked around a bit with it and then went to class. When I went to check my town later in the day, I was greeted by an error message that said Base “0” not found. [Interface/loadBase]. This is what transpired: 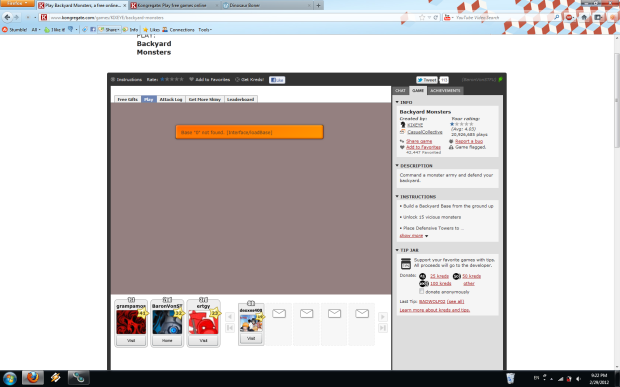 You really don't realize how much life you've wasted till you see something like this a realized all the work you did on your fictitious, virtual world, has been lost, leaving you with nothing.

Wait, what? What the fuck is this? I bet this is just some stupid error on the web page. I’ll reload the game…… What the fuck? It’s still there! Ok, it is probably just the computer I’m using. These school computers can’t be trusted. I’ll try a different one………. Ok, it doesn’t work on this one either. Alright, don’t panic. There has to be a fix for this. I’ll just check the forums.

Long story short, many people are having this error. No one is getting it fixed. The developers are silent about the whole situation. The time that I have wasted on this game is now so tangible that I might as well have been punched in the face. This reality of the situation washes over me at this point. This game is also on facebook. Facebook makes the game developers waaaaayy more money than kongregate ever did. The problem is also on facebook but it appears to be getting attention and is being fixed. Not only that, but the facebook version of the game has way more updates and has fixed some of the problems present on the kongregate version (it’s still annoyingly buggy though). I go over to Kixeye, the developers web page, and they have scrawled over their main page, “WE DON’T MAKE GAMES TO MAKE MONEY…. WE MAKE MONEY TO MAKE GAMES.”

A nice mantra maybe, but if that were the case, they would give equal attention to their fans on kongregate as they do on facebook. Now, I am not entirely naïve. These little developers need to make some bank in order to survive. The thing is though, they just keep people on kongregate totally in the dark. If they were just honest about why they drag their feet on the kongregate version, I could still respect them. Unfortunately they don’t.  I made my way over to the facebook version of the game like a sad sack.  Just like those bastards wanted me to.  My butthole is gonna be sore from this for a while. 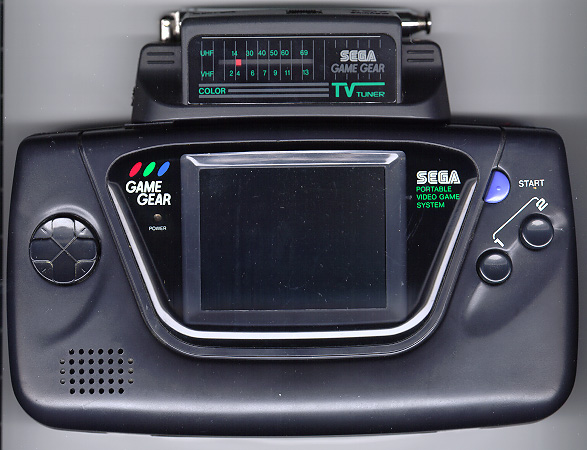 I wanted this tuner so bad for long car rides. It was discontinued before I could get it though. Probably for good reason.

The Game Gear was the first mainstream color hand-held system. Back then, all we had was the black and white (green and white) Gameboy. Don’t get me wrong, I loved my Gameboy. It brought me countless hours of pleasure. However my Gameboy was getting old and paunchy. No, I wanted flash again. I was still young! I wanted games with pizazz and sex appeal. I wanted color! The Game Gear would fill the void I was feeling. I had been saving money for months for what, I don’t remember. The Game Gear came with a hefty price tag. I don’t remember how much it cost. I wanted to say about $200? Anyways, it didn’t matter because I NEEDED to have it.

I was happy to take my time and save up what I needed at first. Then my neighborhood friend had to come and screw with my plans. HE was going to get a Game Gear. HE would have one before me. This couldn’t happen. I needed to be the first to have Her. She tempted many an eye but it would be I who won Her over. I remember frantically doing chores that I hadn’t even been delegated. I don’t remember what I was doing outside, possibly weeding, when my dad found me. He was confused to see me doing whatever made up chore I was doing and asked me why I was doing it. I cracked and told him my problem. I think I had about 90% of the money saved up. Seeing how broken up I was over it, he decided he’d loan me the last part of the money so I could go buy myself a Game Gear. THE DAY WAS MINE!  (That prick was lying and never actually got a game gear.  I think it was at this time that I started to question the truthfulness of mostly everyone)

Back then, even newly released systems came with games. Game Gear came with the Game Gear version of Sonic. It was this game, that should have sent up red flags. I remember it being shitty. The controls weren’t very good. The screen was kinda blurry due to the low resolution. Moreover, the Game Gear was a battery hog, requiring 6 AA batteries. I was tied to a wall outlet because of this. Much like an abused spouse, I was in denial. I told myself the system was good and the games were good. I ended up getting Chessmaster (Welcome…. To the Chessmaster) and Batman Returns. Neither were good games. The “Chessmaster” took several minutes to make his move on higher difficulties. It was painful. Batman Returns was mediocre at best (although I loved that grappling hook). I learned a valuable lesson from the Game Gear. If something is too good to be true, it usually is.

Infamous Save: Legends of Zelda 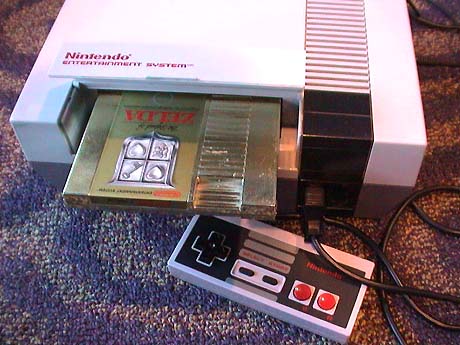 I fucking LOVE the original Legend of Zelda. It is a great game that I still go back and happily play today. Sometimes loving relationships have speed bumps though. To this day, I still don’t know why it was this way, but to properly save on the original Zelda, you had to hold the reset button while you pressed the power button when you shut off the game. Well, as I was about 5 years old when I was first playing this game, I guess I was retarded and had trouble with this. This bastard of a game forgot my progress numerous times. It wasn’t just pressing the wrong button though. The game had memory that required a watch battery. This battery did not last and chose really inopportune times to crap out on me. So many lost games. So much lost time. I kept on going back though because the game was JUST THAT GOOD. I would like to play this game again on the original Nintendo, but I guess I’ll just have to settle for the emulator version. An emulator won’t play with my love. An emulator won’t lead me to tears.

I’ve mentioned my hatred for FF XII before. This game was the nails in the coffin for my love affair with Squaresoft (although we do have a fling every once and a while). Squaresoft made the first real RPGs I ever played. I had never experienced games that had such detailed and well written stories and characters. The original Final Fantasies had worlds that were gigantic and took hours to explore. Squaresoft had put the moves on me and won me over. It became one of the most abusive series in my life because of how lovestruck I was for these games. It started with just a little incident. It was nothing really. Squaresoft just got a little drunk and got lost its temper. It happens. Final Fantasy X wasn’t too painful though. I mean, it had it’s moments. Auron was pretty cool right? Well, I should have known better. I should have seen the writing on the wall. My relationship with Squaresoft (SquareEnix), was headed for trouble. By the time Final Fantasy XII came out, it was full blown abuse. I wanted said no, but Square forced itself on me and took advantage of my trust with a terribly written story, boring gameplay and terrible characters. I looked at the bright side of things, at least the game still had an interesting Cid right? The magic system is kinda cool I guess? I’ll just play a little bit more. Squaresoft still loves me.

Well, 70 hours later, I beat the game. It was the most anticlimactic, totally lackluster pile of shit ending I have ever experienced. I had NO idea that I was headed to the last battle. Usually there’s a lot of pomp and circumstance before it happens so you know it’s coming. I also had NO idea that the final boss was actually the main villain of the story. I can’t even remember his name. I think it was Seymour or something lame like that. Not only was he a terrible villain, but he was super easy to defeat. Getting to him was much harder than beating him. I remember saying audibly, “THAT’S IT? THAT’S THE END?” I was furious. WHAT A FUCKING BULLSHIT GAME. I hate anyone that likes it.

Well there you have it. I am sure anyone that has played video games regularly has many stories like my own (virtual boy, cough). You feel stupid and useless after it happens, but you keep trying again. It’s really sad. We are a sad lot. ANYWAYS MY TOWN NEEDS ME.

One thought on “RAPED By Video Games”