I scored some free advanced tickets to Wreck-It Ralph last night.  Don’t I feel special!  It was also the first time I’ve ever been in a movie and had a trio of security guards threaten the crowd with jail time if they used their phones to capture any of the film.

The film is a definite winner.  In a year where I struggle to even think of another good animated film, Wreck-It Ralph stands alone atop its pixelated throne.  It tells the story of Ralph, a video game bad guy in the fictional classic arcade game Fix It Felix Jr.  Much in the vein of Toy Story, once the arcade closes down and the humans are out of sight, the video game characters come alive and have lives of their own.  Ralph, however, remains a bad guy even after the humans leave.  The characters in his game don’t like him because he’s always wrecking things.  So Ralph decides to “game jump” in order to prove to everybody that bad guys can achieve something great too.

Based on the trailer, I sort of assumed that the movie would be constantly jumping around between games, and the entire film would just be a hodgepodge of awesome video game references.  And while it still kind of did that in some respects, the plot of the film is actually very focused and mainly takes place in just a couple of games.  While it was happening I kind of wished the film would jump around more because it was so much fun, but by the end I realized that what they did was for the best.

Because despite the fact that a good chunk of the movie takes place in one particular game, the success of Wreck-It Ralph is in the little things.  The world of this film is flooded with recognizable video game faces/references.  And a lot of them aren’t even the focus of the shot.  When scenes take place in the central hub where characters can jump from game to game, I couldn’t help but stare at the background the entire time.  Just all the little things made me smile so much.  Seeing Princess Peach and Daisy from Mario giggling like schoolgirls as they walk past a guy.  Seeing Ryu from Street Fighter drinking casually in the background of a bar.  There’s so much going on in the background, I’m sure I missed a dozen things that I wished I hadn’t.  I look forward to seeing this again on Blu-ray, and pausing the screen.  Maybe someone who isn’t as familiar with video games wouldn’t care about these things, but I thought they were great touches.  Pac-Man gets referred to by Ralph as “that pellet muncher” as an insult.  I just thought I should mention that.

The character development was great for most of the characters.  Even some of the side characters like Felix and the Sergeant from Hero’s Duty.  Ralph has a full and satisfying arc.  The voice acting from everyone fit in perfectly.  John C Reilly embodied Ralph pretty well.  Jack McBrayer (who voiced Felix) acted exactly like Kenneth from 30 Rock.  I’m now convinced he’s not even acting in anything he does, that’s just how he is in real life.  Jane Lynch is funny as the Hero’s Duty Sergeant (with a comically dark history programmed into her character), and Sarah Silverman is both annoying and adorable as her character from Sugar Rush, even if it sounds like he’s plugging her nose every time she speaks.  The big surprise, though, was Alan Tudyk as King Candy; who did a really fun job with the voice. 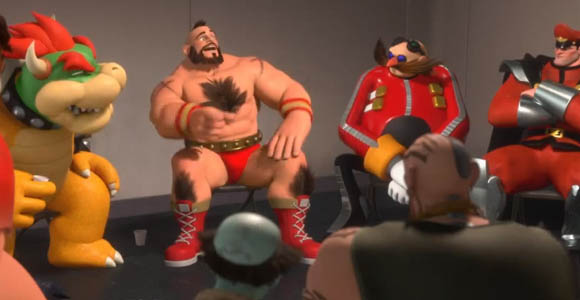 The sound design overall was fantastic, and notable enough to notice/care.  The soundtrack had some nice 8-bit elements (and is very good overall), and a lot of the sound effects were recognizable from classic video games.  Skrillex has a computerized cameo and contributed a song to the movie.  That’s worth noting, I guess?

The animation was cool, featuring a lot of different styles.  Early in the story, the film would shift between 2D and 3D environments.  Even when in 3D, the character animation would relate to the 2D game that the character came from.  All of the Fix It Felix characters would move in jumpy 8-bit type motions, even when rendered as 3D models, giving them intentionally hilarious body movements.  All of the environment designs were very inspired, and looked like a lot of fun to create.  There’s a lot going on in the design this movie, and it’s all awesome.

I guess this would be considered a children’s movie, but the adults were laughing as much as the kids.  This film may not have been made by Pixar, but it felt like Disney’s got the hang of the Pixar style without them.  Wreck-It Ralph out-Pixar’d the Pixar movie from earlier this year (Brave).  It didn’t just feel like Toy Story in the similar premise, but it was just as clever and funny in all the ways Toy Story was as well.  I’m sure they’re banking on nostalgia and childlike wonder to drive Wreck-It Ralph into ‘classic’ territory, but those are the same things that made Toy Story so great too.  If Wreck-It Ralph wanted to branch out into some sequels (and it totally has potential to do so) that would be great.  The way they set up the open world within the arcade has limitless story possibilities for the future.

The overall message of the film was more cute than anything else.  But I got the feeling like they were going for cute, so I didn’t hold it against them.  It’s a cute movie.  But the action is also awesome.  And very entertaining.  And all the humor is clever and witty, while still relatable to kids and people who don’t care about video games.  I’m saying that the movie is generic enough to please everyone, but has enough in the little details to make some people (like myself) very happy.  But still, overall, it’s just really cute. 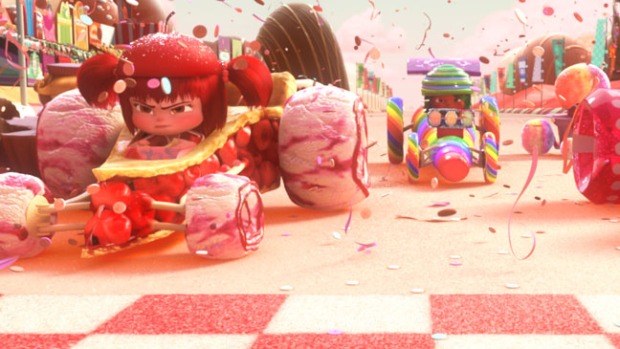 It was a 3D feature, and like most 3D movies, the gimmick wasn’t very worthwhile.  I got to see this movie for free, so I can’t really complain, but if I were you I wouldn’t pay the extra for 3D.  Plus, who knows what was lost in the color/brightness levels with those stupid glasses on?  This movie is vivid enough to where I wouldn’t want to risk losing any of that if I didn’t have to.

Wreck-It Ralph is worth your money.  The first half is admittedly more mesmerizing than the second half, but for a two-hour animated film, the time flies by pretty quick.  I don’t think you *need* to stick around until the absolute bitter end of the credits like I did…  but if you do, you get to see the Fix It Felix Jr “kill screen” (those of you familiar with King of Kong should know what that is).  Best video game movie ever?  Perhaps.  But it’s not like there’s a lot of competition…  Hey, remember The Wizard?