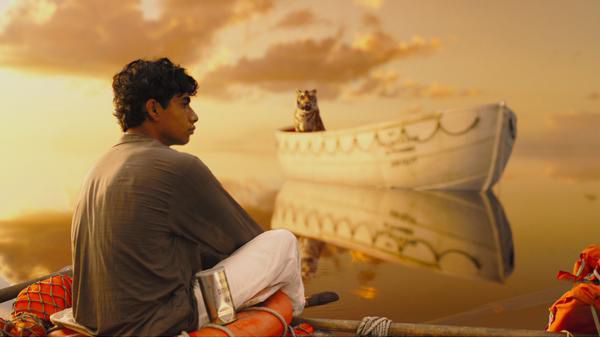 Premise:  A coming of age tale about a boy who gets stranded on a lifeboat with a Bengal tiger.  This will make for a great reality TV series in the future, some day.  They can call it Strife Boat.   C’mon FOX/SyFy/TLC marketing department, hire me!

-Visually; the film is fucking incredible.  Some really amazing cinematography.  I particularly liked the underwater shots of the boat sinking, and pretty much all of the shots that played with water reflections.  I don’t care how manipulated they probably were by special effects, they still looked great.

-Has a suitable amount of character development in the first act, especially for characters that end up dying at the end of the first act.  It’s still appreciated.

-For the most part, it moves along at a brisk pace.  Or more so, the first act moves rather briskly, the second act stalls in the pacing (but amplifies greatly in the entertainment), and the third act sort of slows down and gets overly philosophical.  But as a whole the movie moved along quicker than it probably should have for a film about someone lost at sea.

-The relationship between Pi and Richard Parker (the tiger) was brilliantly developed.  It takes it nice and slow, and is about as realistic as it could possibly be in this situation.  That’s not to say it was realistic at all…  But if I *had* to believe this was a true story (which it never claims to be), I would think their conflicting relationship was as close as it could be to reality without it being the most realistic reality; which was that Pi would have totally died.  Oh man, he would have died so hard.

-Nice to see an Indian family portrayed in a film and not have them be engulfed in poverty.  The first act had strong potential to be a Slumdog Millionaire knockoff, but it chose to stay whimsical and funny instead.  It stays rather lighthearted until this kid’s life completely falls apart.

-The kid who played Pi was really good.  I have no idea who he is, but I imagine we’ll see more of him.  Or does Hollywood abide by Walking Dead racial guidelines, and there can only be one famous person of a particular race at any given time…?  Watch your back Dev Patel!  Your character can be killed off on The Newsroom at any time!  And I don’t think The Best Exotic Marigold Hotel is getting a sequel!

-I dug the slow, breezy opening credits sequence with the zoo animals (even the CGI ones).  Any movie that features a three-toed sloth in the first two minutes is alright by me.  They are nature’s greatest creation!

-Has a crazy 2001-esk visual tornado of weird trippy shit.  It was a random moment that I thought added to the film’s overall oddball/artsy atmosphere.  It was a scene I’m sure went over very well in Colorado.

-I was pretty fascinated by this movie from the shipwreck scene until he gets to “the island”.  The film’s second act was about as entertaining as it gets for me.  I loved it.  It kept coming up with new ideas and managed to keep things constantly interesting.

-The film’s opening and closing acts however felt like different movies.

-I didn’t like, at all, the expository present day shit.  I didn’t feel like the movie needed to be told as a storytelling flashback from adult Pi.  Especially when scenes like the “tooth” scene had to be explained in painstaking exposition because it wouldn’t have made any sense otherwise.  And even after it was explained, it was kind of a stupid concept.  Did you notice how the best chunk of the movie was told without the back-and-forth timeline crap?  The film really starts to get rolling the last time you see present day Pi in the first act, and starts to go downhill once we are reintroduced to him in the third act.  Just sayin’.

-I don’t know how large an average tiger poop is, but I’m assuming that boat should have been coated in 200 days of tiger poop.  UNREALISTIC.

-Cafeteria scene was a little cheesy.  I suppose they needed it to establish some sort of villain character to validate the ending.  But I mean, were you really that surprised that a shipping freight didn’t have vegetarian food options?

-As good as Ang Lee’s career has been, with Life of Pi being another success; I will always remember him for that terrible Hulk movie.

-The trailer gives away a few key moments.

-Some of the animals were painfully CGI-looking.  The zebra was too CG, the orangutan was too CG, and pretty much every bird in the movie was way too CG.  The whale looked, uh…  dumb.  And it was easy to tell when Richard Parker was a real tiger and when he was totally fabricated.  A lot of times they would show a CG animal and in the next shot show a real one, and it just made the CG one look even more awful.  Oh, and meerkats.  Just meerkats.  Seriously.

-Should have gotten Andy Serkis to play the tiger.

-I thought the religious aspects were funny and amusing in the beginning.  But the film takes a turn at the end that makes it way too heavy on the subject.  So much so that the entire essence of the movie has to be explained in some sort of deeply read religious tone.  I would have liked it so much more if it was just a fantastical tale of being in the middle of the ocean with a deadly animal, and not a heavy-handed message.

-Kinda didn’t like the island stuff.  But it was necessary to have the ending that they did.  Again, it changed the film from an interesting survival story into a religious thing.

-Some lady brought her 7-year-old to the movie, and they sat right behind me. The kid wouldn’t sit still and kept saying stupid comments really loudly.  “WHAT IS THAT?”  “NO WAY!”  And the mom had to read the subtitles out-loud to the kid…  November wasn’t a good month in the “annoying kids in the theater” regard.  I was also sandwiched between smelly old people.  And I’m not saying that to be mean; as if all old people smell like moth balls and cheap perfume.  But these ones did.  But to be fair, this is to be expected at an 11:40 AM screening of Life of Pi.

Final Thoughts:  I liked the core story of this film.  It’s a compelling survival story that happens to be mixed a lackluster philosophical journey.  You can read into Life of Pi pretty deep if you wanted to, I imagine.  On this first viewing, I just took it in as entertainment.  Maybe I’ll go on a deeper journey next time, because I’d like to see it again on Blu-ray in the future.  PURPLE MONKEY DISHWASHER.  (I didn’t have a good closing line for this review)