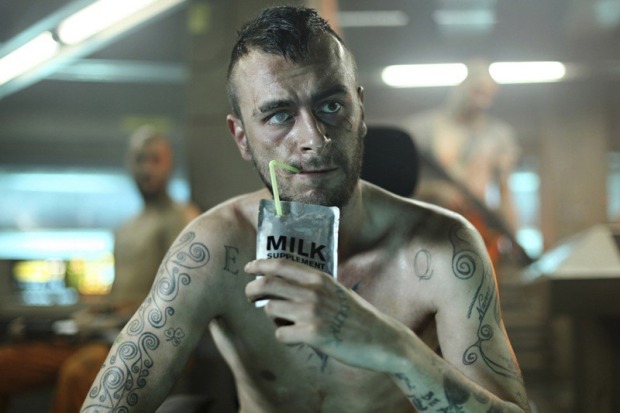 The last couple of months have been very strange/busy/sad/crazy.  I haven’t had all the time in the world to full write movie reviews for everything new I’ve seen, hence all the Lazy Movie Reviews lately.  Well, it’s about to get even lazier!  I’ve seen a bunch of random movies released this year, and if I don’t just poop them all out in one big post I’ll probably never get around to reviewing them.  So here they are:

It’s less about the making of Psycho than it is about the marriage between Alfred Hitchcock and his wife/writing partner Alma.  I would have much rather preferred it just be about the making of Psycho.  It’s ironic that the Hitchcock film revolves around making one of the most controversial, influential movies off all time; and then have the movie be by-the-books biopic crap.  Hitchcock is entertaining and interesting, but it’s absolutely nothing special.  Just one of those movies that comes along every year that has a famous actor doing an impersonation of a historical figure with hopes of winning an Oscar.  The Academy Awards loves impersonations of historical figures.  They are never bad movies, but they are almost always forgettable.

Seeking a Friend for the End of the World

Anyone else sick of sad, mopey Steve Carell?  He’s full force sad in this one, giving the same performance he gave in Little Miss Sunshine and Crazy Stupid Love.  The movie opens with a hilarious scene, maintains the entertainment for the first half, then sort of fizzles out and becomes overly serious in the second half.  Keira Knightly is way too bubbly and loud in this movie.  Her character has the kind of stereotypical movie quirkiness that makes her care more about saving her record collection than worry about the end of the world.  There are some really great scenes in this movie, but it very uneven overall.

Cheap found footage ghost hunting nonsense.  It’s produced by the Paranormal Activity guys, which makes sense because it’s just a poor man’s Paranormal Activity, and that’s already a poor man’s ghost movie.  There are like three moments that were kind of clever in the entire film, then the rest of it is just cheap jump scares, bad acting, and awful sound quality.  Seriously, it was terribly mixed audio.  And it ends exactly how every single found footage ghost movie has ever ended; with the ghost lunging towards the camera real fast…  for some reason…  why are these ghosts always attacking cameras?

The gimmick is that the entire film takes place in one take.  I don’t necessarily even believe that’s true, I thought I saw a cut point a couple of times, or at least the opportunity for a cut point.  It’s not even scary for the first 45 minutes; it’s downright boring.  Then when the movie finally picks up, it’s still pretty boring.  And of course it ends on the most predictable twist possible.  Just guess what the twist is, and you’re probably right.  The cinematography is terrible.  The third Olsen girl is still a pretty good actress, though.  She seemed better than this movie deserved.

The Deep Blue Sea (not the shark movie)

This movie is the closest thing I’ve ever seen in real life to being “The Tea Cozy” from The Critic.  Who actually enjoys this kind of depressing, slow-paced crap?

Kind of a Borat-esk film about a comedian who pretends to be a foreign diplomat in Africa with the hopes of being able to take diamonds across borders and be rich.  It’s a fake character inserted in a real life situation, and a dangerous situation at that.  People he talks to at the beginning of the film end up dead by the end of the film!  There are also some really funny moments, and there are some really interesting things to learn about blood diamonds as well.  But the film is incredibly hard to follow.  And it’s not exactly told in the most interesting way, or with any kind of engaging pacing.  I was kind of in and out of paying attention at times.  I wish this was handled better, because it had the framework of something that could have been great.

Most of the movie is absolutely hilarious.  Other parts are kind of eye-rolling cheap jokes.  And the last twenty minutes didn’t even attempt any jokes.  It’s like Seth McFarlane didn’t know how to end the movie properly.  But the voice over narration by Patrick Stewart is amazing, as are the job interview scenes. If you like Family Guy, I don’t see why you wouldn’t like this too.

A documentary about male grooming habits, directed by Morgan Spurlock (Super Size Me).  It’s broken up into segments about different areas of grooming, and they use up the two best segments right away (mustaches and beards), leaving the remainder of the movie less interesting.  But the impressive slew of famous interview guests keep it watchable.  I would just like to say that the guy most heavily featured in the beard segment, Jack Passion, is the lamest person alive and I hate him.

It’s basically Escape From LA, but set in outer space, and features a guy names Snow instead of Snake.  Was Kurt Russell not available?  Couldn’t they just have just made this the third in the series and called it Escape from MS One?  To Lockout‘s credit, I suppose I’ve seen dumber action movies elsewhere.  At least the villain was fun. But this movie’s shortcomings continue my belief that Guy Pearce is an overrated waste of talent, and I’m sick of him.

In a poor coal mining town, kids are mysteriously disappearing.  Is it a ghost?  That’s what Netflix seemed to indicate in the plot description.  But I’ve never seen a movie go all over the place the way this movie did.  It starts off as a supernatural type movie, then turns into a straight up horror film, then turns into a twisty psychological suspense movie, then turns into a Lifetime drama movie, and finally rests somewhere around a giant conspiracy film.  The guy who wrote this movie probably had a huge grin on his face and thought he was writing the next Sixth Sense.  And frankly, I’m surprised M Night Shyamalan didn’t make this twist filled snooze fest like six years ago.  It could have fit snugly between The Village and The Happening.

Michelle Williams plays one of the most frustrating characters I’ve ever seen.  She’s a character who is “afraid of being afraid”.  They literally say that line in the movie.  She’s married to Seth Rogen’s character, but out of chance meets her dreamy neighbor from across the street and starts to fall in love with him.  This whole movie made me feel terrible for Rogen’s character, because he was such a genuinely nice guy, and she just crapped all over their relationship for a lusty desire.  It’s a miserable movie.  But it wants to be a miserable movie, so I can’t really fault it there.  There are a few good scenes, but prepare for a lot of cute indie music and slow motion music montages throughout.  I assume the only lasting legacy this movie will have is that it’s the first (and only) place to see Sarah Silverman naked.

Mel Gibson in a cheap action movie set inside a Mexican prison.  In a surprising turn of events, Mel still looks rather spry.  But the movie is about what you’d expect.  Guns, explosions, simple plot, bad one liners.  Of course it’s not good, but it never enters “so bad it’s good” territory either.  It’s just kind of alright.  I’m actually not sure what Mel Gibson’s motivation was to make this movie.  Was this a passion project?  Was it the only script in Hollywood he was capable of, because of his decline in reputation?  I don’t get it.

We Need to Talk About Kevin

A pretty disturbing look at the childhood of a deranged kid named Kevin who eventually goes on to do horrible things.  The film is edited in a back and forth narrative structure, zig zagging scenes of his childhood habits and the aftermath of his mother (Tilda Swinton, who’s quite good in this) coping with the neighborhood treating her like a pariah.  Its got some great cinematography, and is very good at telling the story in a compelling way.  The entire movie I was curious as to what exactly Kevin actually did, and when it’s revealed, it did indeed make me feel terrible.  In the wake of the recent Connecticut tragedy, this movie seems more relevant than ever.  Pretty disturbing.  Well, that was kind of a down note to end this post on…