In honor of Tarantino’s DJANGO UNCHAINED which dropped in theaters on Christmas Day 2012, the Alamo Drafthouse is going all-out Spaghetti Western at its Austin locations. It started, appropriately, with DJANGO, the 1966 flick starring the blue-eyed beauty Franco Nero. Spaghetti Western nerds were quick to note his cameo in DJANGO UNCHAINED, which was featured in some of the trailers running up to the film’s release. 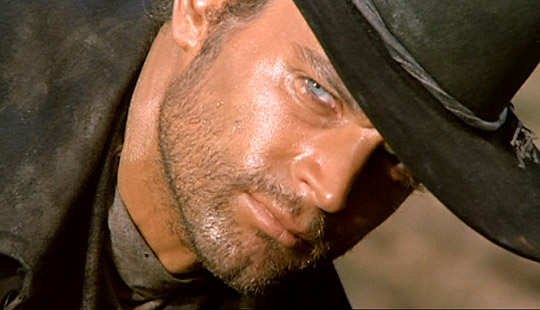 He’s still a blue-eyed beauty. Its seriously impressive how much he still looks like himself. I know that sounds weird but not all dudes age so well…

The original DJANGO focuses on a former Union soldier, Django, and the mischief he gets into when he decides to exact revenge on a racist Confederate, Major Jackson, and his pack of KKK-like cronies. Django ends up in a small frontier town at the mercy of two factions in the area: Jackson’s racist jerks, and a band of Mexican revolutionaries. The town appears to be made up only of a brothel run by the cowardly but well-meaning Nathaniel who pays protection money to Jackson to keep himself and his ladies alive. Enter Django, who baits Jackson into appearing by killing five of his gang members as they attempt to murder a half-Mexican, half-American whore with ties to both sides.

These story elements alone make it sound like DJANGO borrows from Sergio Leone’s western playbook the entire time. Corbucci gives Django some more personal interest by making his motivation revenge against Jackson for a past wrong, unlike Leone’s ‘Joe’ from A FISTFUL OF DOLLARS who really just wants to see overzealous idiots die and make some money off of it. If comparing those two films, DOLLARS does a better job of the two factions angle because they actually get played off of each other. In DJANGO, Jackson’s KKK and General Hugo’s revolutionaries never really square off. Django just mows them all down, like he should.

The reveal of the machine gun in DJANGO pays off immensely, but then Corbucci reveals it again later in a stagecoach just like Leone did in FISTFUL OF DOLLARS. This second reveal comes in a bank heist. And just like Gian Maria Volonté mowing down American soldiers at the creek, General Hugo’s lieutenant mows down Mexican bank guards in DJANGO.

It could be easy to look back at all of this now and see these correlations between movies, but part of me thinks that this is just how Italians thought of the American Wild West. American westerns rarely deal in such massive body counts, ambitious heists, and copious amounts of ketchup-colored blood. Italian cinema was more interested in glorifying the action. American cinema was more interested in glorifying the ideal man fighting for the American Dream.

The angle of the “love story” and the use of the 60s pop-inspired theme song (sung by Rocky Roberts) gives the air of Corbucci being conscious the American success of Leone’s films. He tries to incorporate elements of American cinema into his vision of the west and they don’t quite seem to gel.

However, the elements that make his directing truly shine are the ones that set him apart from Leone. Cinematically, Corbucci likes his cameras to be in the thick of the action, shaking and moving just as much as the characters involved. He also tends to use much more music than Leone, with DJANGO being a notable example. Rather than let there be long spans of silence, Corbucci tends to mix in music with almost every scene, the point of obscuring dialogue and other sound effects because music is there. From my experience, Corbucci was less attentive to the details of the sound mix than Leone, and perhaps including much more music was an easier way for him to edit the sound. After all, Italian cinema in the 60s was filmed silently, with all effects and dialogue recorded and mixed afterwards. If music was there, less attention had to be paid to making footsteps heard, doors creak, horses neigh, etc.

The parallel between DJANGO and DJANGO UNCHAINED comes from more than just the obvious reference in the title. Tarantino followed a linear presentation of his narrative, quite possibly the most linear of any of his films. This resulted in some pacing issues throughout DJANGO UNCHAINED; there is an obvious stopping point after the second act of the film that most critics have noted in their reviews. Much like DJANGO, Tarantino’s film has three encounters: 1) the Brittle Brothers), 2) Candieland, and 3) revenge. Interestingly, they are weighed narratively similarly to DJANGO, in that the second section of the movie lasts much longer than the other two. But that doesn’t make the other encounters any less important.

Whether the structural similarities are between DJANGO and DJANGO UNCHAINED or DJANGO and nearly every other Spaghetti Western is kind of a moot point. But seeing them close together like this makes the narrative similarities pretty obvious. I actually found Django’s story less compelling than Joe’s in FISTFUL OF DOLLARS because of the love-revenge angle. I like my Spaghetti Western cowboys ruthlessly self-reliant and uninterested in human comforts. That aside, DJANGO is like the distillation of everything that makes Spaghetti Westerns so compelling, with a few sprinklings of American cinematic inspiration that intrude, but don’t ruin, the film. And he does it in half the run time of a typical Leone film. Plus the body count is ridiculous. Chances are you’ll come away from this film thinking of RESERVOIR DOGS as well.

p.s. You can apparently watch the whole thing on YouTube.