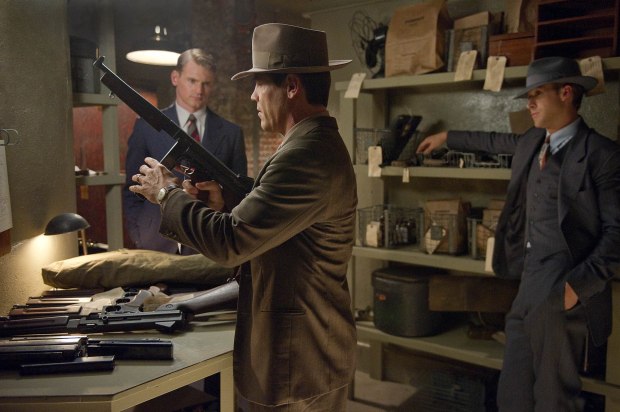 Premise:  It’s a few years after WWII, and Los Angeles is being run by the gangster Mickey Cohen.  A team of colorful police officers form a vigilante, off-the-books squad of gangster hunters to ruin Cohen’s business.  At one point, Cohen says the line “You know the drill…”, and then his henchmen kill a guy with a power drill.  Yes, this is apparently based off of a true story.

-I guess it’s a nice slice of 1940’s LA life, with some interesting sets and costumes and such.  I don’t know how much detail they actually put into the film, but it’s an interesting time period/place, so I liked it.

-The violence is pretty grand.  People get torn in half by cars, burned alive, shot to pieces…  It seemed more cartoonish than frightening, which worked for its benefit.  Gangster Squad worked best as a Dick Tracy-like comic book, as opposed to anything I was supposed to take seriously.

-None of the actors had particularly good performances, but they at least provided entertaining performances.  Sean Penn yells a lot, Josh Brolin acts like a meathead, and Baby Goose talks hilariously smooth the entire time like he’s trying to take the screenplay out on a date or something.

-The stupidity of the plot actually works to its advantage, because to try to interpret this movie as anything short of a two-hour burst of stimuli would result in this being one of the worst movie’s ever made.

-It’s just dumb, violent fun.  Worthy of watching for free on HBO or something if you’re into gangster films.

-The introduction is bland, and uses voice over to try to make me believe the film is actually about something.  They try to insist that the message of the film is that everyone wears a badge of some kind, to show what they truly believe in.  But then throughout the film, everyone takes their badges off to get the job done, so I’m not actually sure what the point of the intro was.  Was their new badge their heroism?  Their military expertise?  Are they saying the actual police badge wasn’t as good as those?  Then why does the epilogue of the film feel like a commercial for joining the police force?  Eh…  whatever.

-The film is full, and I mean FULL, of stupid and cliché elements.  Starting with the squad members.  There’s the brute force leader, the smooth talking sidekick, the token black guy (who can throw knives?  wait, what?), the really old guy who insists on only using his cowboy six-shooter, his rookie protegé who learns the way of aiming guns (?), and the brainiac who invents gadgets for the squad in his garage.  Then the villains consist of a heavily make-up covered Sean Penn who says things like the drill line I already mentioned, and his main henchman who has a glossed-over right eye and never speaks.  I was able to guess who was going to die, and how, and then what plays out in the scene after their death, and I was probably 95% correct.

-To continue down the cliché path, let me tell you exactly what kind of movie Gangster Squad is…  This sums it up pretty nicely, actually.  It perhaps slightly spoils the end of the film, but if you didn’t see a showdown between the two main characters as the obvious ending, then you are probably rather simple.  OK, for a little context, Mickey Cohen was established a million times throughout the movie to have been a great former boxer.  So, at the film’s climax, Josh Brolin’s character finally has the edge on Mickey, and is standing 15 feet away from him with a gun pointing at Cohen.  Instead of shooting him dead (like he’s done with most of the other gangsters in the film), or at least insisting that he get on the ground to handcuff him; Brolin instead throws his loaded gun on the ground and puts up his fists to have a boxing match…!  For real!  As if Cohen deserved some kind of respectful display of confrontation, like Cohen had a code of honor that was so highly regarded that Brolin had to fight him fairly out of respect.  If I’m not mistaken, this is the same villain that ordered four guys with tommy guns to shoot up Brolin’s house while his pregnant wife was sleeping in it earlier in the film…  I’d definitely show that guy some respect when I confronted him [makes wanking motion].  Or was it just pure machismo that drove him to want to box an ex-champion boxer in the only situation he’s ever been face to face with him?  Well, I guess Brolin is lucky Cohen didn’t bother to pick up the loaded gun he just threw on the ground, and shot him in the face with his own gun…

-I also must have missed the part when Cohen discovered who the identities of all the gangster squad guys were.  It was almost like the scene where he discovers who they are was edited parallel to the mobsters going after their families…  I don’t know…  Not worth thinking about, I guess.

-The Baby Goose / Emma Stone “falling in love” side story felt rather forced.  As in, they had no (non-sexual) chemistry in any scene, yet Baby Goose was still all like “I’ll die for that girl, Sarge…”  The one scene where they actually show them being domestic together, they are bickering and slamming fists on tables.  The rest of the scenes are either of them knockin boots or of them talking for like five seconds because they are in danger.

-Nick Nolte is in this movie, and as usual, he looks and sounds like a ball of hamburger meat being pushed through a cheese grater by a gorilla.

Final Thoughts:  It’s a very dumb movie, but I can’t lie and say that it wasn’t entertaining.  When I try to analyze the logic flaws in Gangster Squad, it just makes me feel like I wasted two hours of my life on a stupid fucking movie.  If I just remember that it kept me entertained with bright colors and loud noises for two hours, then I feel a little better about my choices in movie selection.  Despite all its shortcomings, it’s definitely loud and bright.  Gangster Squad pretty much defines the kind of mindless entertainment that we’ve come to expect with a January release.  We’ve officially begun the three-month time period when the studios release all of their sub-par movies that they don’t expect to make a lot of money and/or win any awards.