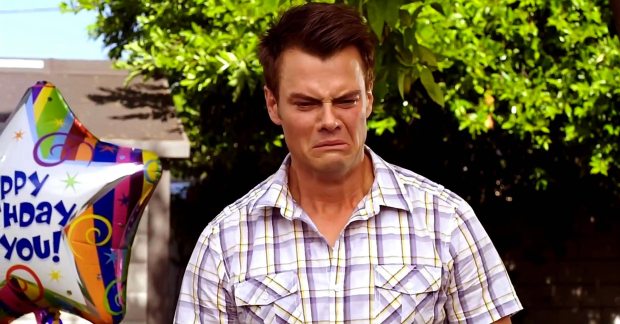 I hope you’re all enjoying January, everybody!  A winter wonderland of rejected movies that studios are scared to release any other time of the year.  In most cases, it seems like a justifiable move, as most January releases are terrible.  I actually like that they do this.  It’s a heads-up that what you are about to see will be awful.  A full month of lowered expectations.  Now, I see movies pretty much every weekend, so I’m quite aware that I won’t like what I see this time of the year, but I watch them anyway.  Probably out of boredom.  In Movie 43’s case, I saw it out of morbid curiosity.

Supposedly taking four years to make, in order to get the A-list talent to work in between their real films, Movie 43 is a handful of short sketches created by several different directors.  All of which are under the guidance of one or both of the Farrelly Brothers, who haven’t been funny since Me, Myself, & Irene came out 13 years ago.

Movie 43 is basically the lowest form of comedy.  Not even just in the potty humor that runs throughout, but in the fact that every joke is dragged out obnoxiously too long, and most of them don’t even have punchlines.  The whole thing is basically a concept.  And the concept is whether or not you’ll laugh at the thought of “poop”.  Not even jokes about “poop”, but just the fact that “poop” exists.  Or the fact that “testicles” exist.  Or the fact that “boobs” exist.  This movie doesn’t really make jokes about any of those things, but it simply says the word “poop” and hopes that you’ll giggle mercilessly like a 12-year-old boy.  This is basically a 100 minute adaptation of the moment when Beavis & Butthead hear the word “Hollywood” and then Butthead goes, “Huhuhuhuhuhuh…  WOOD…  huhuhuh…”

Since it made basically no money at the box office (but to the film’s credit, it only cost $6 million), I’m going to assume none of you actually saw this film, and most of you have no plans to ever see it.  Let me go through and explain to you the atrocity that was Movie 43.  Or as I like to call it, Two Good Short Films Floating in a Sea of Garbage Water.

The first segment is the main story of the film, about Dennis Quaid (dressed in a bizarre teenage outfit and haircut) trying to sell a studio executive (played by Greg Kinnear) a movie that consists of the worst ideas ever.  Basically he says, “Now wait, listen to THIS idea!” and it goes into a short film, for the entire length of the film.  It also features Seth McFarlane trying to pitch a movie idea saying “Well, it’s basically Family Guy meets Schindler’s List…” giving you an idea of the cheap, lazy laughs that Movie 43 is going for.  And it ends in the laziest way possible.  The film quite literally gives up on this segment.  I’m happy we sat through all that boring, humorless crap knowing that they would just give up on it without a punchline…  They, again literally, just say “Whatever, let’s not even try anymore, just roll the last short film” at the end.  Movie 43’s laziness has no bounds.

The first actual short film is about a blind date between Kate Winslet and Hugh Jackman.  The surprise twist?  Hugh Jackman has a pair of testicles on his neck.  Every terrible joke about balls is exhausted in this segment.  I think I laughed once, when he got cold and the balls shrank; but they were mostly just jokes about dipping balls in soup, and taking a photo with Winslet and the balls resting on her shoulder.  Again, not really jokes about balls; but more so just hoping that you’ll laugh at the existence of balls.  It doesn’t even have an ending, as the short gets interrupted in the main story segment and just stops.  So no punchline.  And also if you remember, South Park did a whole episode where Butters gets balls on his chin, but it was actually clever/funny.


The next short film was probably the funniest thing in the entire movie.  It was about some parents (Liev Schreiber and Naomi Watts) who home school their teenage son.  But in order to make him get the entire high school experience, they go as far as to haze him, torment him, and even give him awkward sexual temptations.  It had an appropriate level of vulgarity, it wasn’t very long, and it had a funny punchline (a rarity in Movie 43).  It had focus and didn’t overstay its welcome.  It was one of two sketches in this movie that I would actually consider watching again.

The next one, however, was back to being awful.  Chris Pratt is planning on asking his girlfriend to marry him (played by real life wife Anna Faris).  But before he can get his question out, she asks him if he’ll poop on her during sex.  He’s nervous about it, so he takes laxatives and eats a bunch of burritos, and the whole thing ends in a big explosion of poop.  Hahahahahahahahahahahahaha! (passes out from laughing so hard)

Whoa, what happened?  I think I was laughing so hard at the diarrhea jokes that I blacked out.  Oh well, let’s move on.  The next one is about two strange lovers (Kieran Culkin and Emma Stone) who have a public breakup in a grocery store.  They just pretty much say inappropriate “love” comments to each other for five minutes, like “I wanna give you a hickey on your vagina.”  It was actually slightly chuckle-worthy, especially when Emma Stone started tearing up; and they did a good job playing it as straight as possible.  But ultimately it had no point and went on too long.  It was also lacking a punchline, and had a dumb non-ending.  In a movie about telling short joke films, they should all theoretically have a good ending, right?  You’d think?  I guess this one falls more into the interesting concept category instead of the actually funny category. 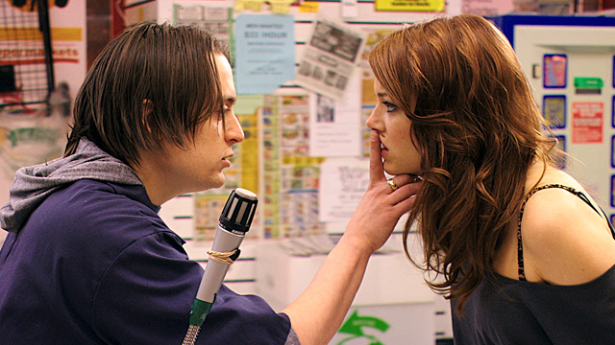 There was a commercial in the middle of the movie as well.  A nonsensical concept that orphan children are inside office equipment like printers and copy machines, and they get sad when you yell at the machines for not working right.  I didn’t know what to make of it, because it made absolutely no sense.

Following that was iBabe.  An Apple spoof about a music players that look and feel exactly like a naked woman.  They put a fan down by her vagina, and the vagina hole is a vent to keep the fan cool.  The sketch is about a board meeting where they discuss the ongoing problem with teenagers sticking their dicks in the fan hole and mangling their genitals.  A possibly (?) funny idea done with the worst execution possible.  It’s a dumb, juvenile, 30-second joke that gets stretched out to like eight minutes.  Richard Gere was in it, as well…

Oh man… the next one, Superhero Speed Dating, is the absolute bottom of the barrel.  Robin (Justin Long) is going on some speed dates in Gotham (with the likes of Lois Lane and Supergirl), and a silly, giggling Batman (Jason Sudeikis) shows up to foil a bomb threat by Penguin.  In the process he ruins Robin’s chances at getting a date, by being an asshole.  It goes on for what seemed like 15 minutes, and it was painfully unfunny.  It felt like a terrible SNL sketch.  The attire was even cheap, 1960’s style Batman costumes, and the whole thing felt slapped together and awful.  The punchline of the skit?  You tell me.  What a complete waste of time.

Ahhh jeez, after that was a short about a middle school date (featuring Chloe Grace Moretz, who at 15, still seems above this role) where the girl has her first period and the boy freaks out.  Then his older brother freaks out.  Then their dad freaks out.  Then the girl’s dad freaks out when he comes to pick her up.  It’s the same joke being told over and over again for five minutes.  And it wasn’t that funny of a joke to begin with.  As far as being clever goes, this segment was on the opposite end of the spectrum.

Then comes the Brett Ratner directed segment.  It features Sean William Scott and Johnny Knoxville (both acting like they didn’t really want to be there) kidnapping a leprechaun (Gerard Butler) and trying to torture it to get its gold.  All of the humor derives from how hilarious you find a leprechaun dropping F-bombs non-stop is, and whether or not you like seeing Johnny Knoxville fight a little person.  I assume fans of Wayans Brothers’ spoofs dug this one.  Or like a regular Tyler Perry watcher.  It seems right up their alley.  It actually does have a distinct punchline, but one so obvious and blunt that it becomes annoying and frustrating.  Ehhhh, I really hated this segment.

Next up comes a blind date segment abou-  wait, didn’t they already have a blind date segment?  And a speed date segment?  And a middle school date segment?  UHHHHG, whatever, this one is about a blind date between Halle Berry and Stephen Merchant, who play a game of truth or dare that starts off small and harmless, but escalates into crazy stuff like getting plastic surgery and whatever.  It actually has a working punchline, which they immediately reverse by extending the segment 30 more seconds and saying “Just kidding!”.  I assume this was because they wanted to show the audience Halle Berry’s HILARIOUSLY GIGANTIC FAKE BREASTS!  HAHAHAH!  BOOBS!  LOOK EVERYBODY, BOOBS!  HOW COMICALLY LARGE!  I think I just witnessed the death of wit.

Also, side question, hasn’t Halle Berry been in enough terrible movies to no longer be considered an A-list talent?  Talk amongst yourselves.

The film kind of closes on the 1950s basketball segment you’ve probably seen in the commercials, where the joke is “black people are good at basketball”.  There’s not much more to it than that.  What you see in the commercial is the complete extent of the joke, but it still manages to go on for several more minutes after that.  If you like seeing Terrence Howard yelling “You’re black, they’re white” while throwing things for five minutes…  then here you go.  For me, it was a true test of patience.

If you manage not to immediately leave during the credits/blooper reel, you’re treated to one final sketch, which is actually pretty funny and the second of the two legitimately funny segments in Movie 43.  It’s a sitcom called Beezel the Cat, in which Josh Duhamel owns a cartoon cat named Beezel who is grotesquely animated and sadistically trying to kill his girlfriend (Elizabeth Banks).  I can’t find anywhere on the internet that tells me who actually animated the cat, but it looked a lot like John Kricfalusi’s work (of Ren & Stimpy fame).  And I love me some John K.  Beezel was directed by James Gunn, who has directed good movies in the past, and is probably the best director attached to Movie 43.  So I guess this sketch’s success actually makes sense to me.  If anything, Beezel made me exit the theater laughing, which I wasn’t expecting to happen based on the 95 minutes that preceded it.  In a movie with two only good notes, it actually went out on one.  Good for Movie 43, I guess…? 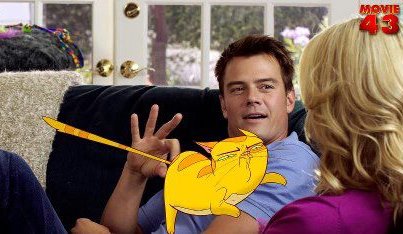 To sum it up, Movie 43 is a terrible train wreck of lazy comedy.  If they ever release all the sketches on the internet, watch the Homeschooling one and the Beezel the Cat one.  Avoid everything else like the plague.