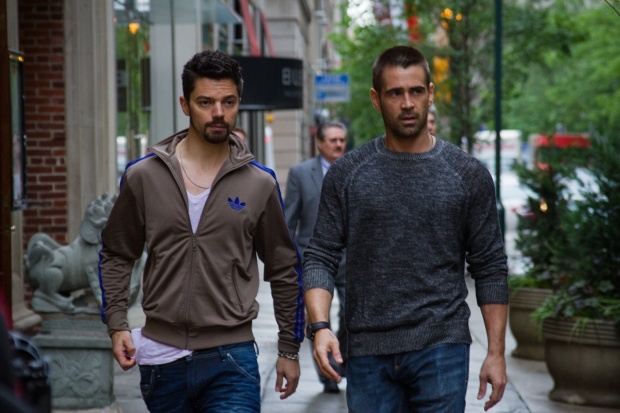 Dead Man Down is a film in which I had NO idea what it was, or what it was about, or who was in it, or who directed it, etc.  Every so often I just like to go see a movie in theaters that I don’t know anything about except its title and the showtime.  Let’s just call the practice “Fandangoing”.  Anyway, what did I find out when I saw this heartwarming little film?

Apparently, Dead Man Down stars Colin Farrell and Noomi Rapace as two people bonding over the thought of getting violent revenge on the people who have wronged them.  Farrell had his family killed by the mob, but he lived, so he joined the same mob years later with hopes of bringing them down one day.  Rapace got hit by a drunk driver, scarring up her pretty face in the process; so she wants to kill the guy who only got three weeks in jail on a technicality, despite ruining her life.  The scars on her face are actually pretty minimal.  Definitely not life ruining.  A few thin lines on the side of her face that are apparently enough to make the local children call her “Monster” and throw rocks at her.  What a bunch of assholes, by the way.  Throwing rocks at a car accident victim?  I guess I’ll blame the film’s makeup department on this one.  Maybe if she looked like Two-Face I’d understand the ridicule.  But she didn’t look that bad. 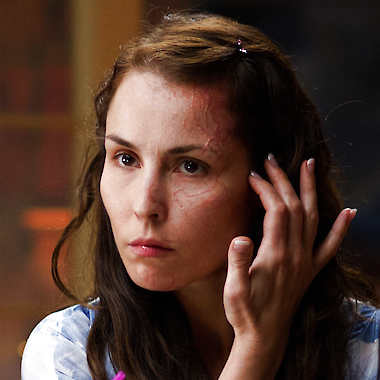 ANYWAY, the first sign of trouble happened before the opening credits even started rolling.  Apparently this is a WWE Studios film…  I didn’t even know WWE Studios was a thing.  Upon researching it on Wikipedia, Dead Man Down is their tenth box office release…!  I have seen zero of the other nine films.  And not to badmouth fans of pro wrestling, they are good people, but the demographic they fall into doesn’t really inspire great movies.  But I was half expecting this film to be filled with wrestlers in small speaking roles, but instead I got Terrence Howard and F. Murray Abraham, so that aspect wasn’t so bad.

The story has a fragment of something good in there somewhere.  I enjoyed the premise of the movie, about two people connecting over revenge.  But it’s just executed so blandly.  And none of the shots were particularly interesting to look at.  In fact, I’ll go ahead and nominate this as one of the worst shot films I’ve ever seen.  Nothing but dark blue colors and dull shadows.  Even in the scenes that take place outside in the middle of the day, it was always overcast and dreary looking.  I’m still debating whether this color palette was intentional, or just the work of someone who didn’t know what they were doing?  Either way, it wasn’t a good choice.

Colin Farrell is a bore in this one.  His character *could* have been played by a pro wrestler to the same effect.  Noomi Rapace does what she can with what she has to work with, but it’s not much.  Terrence Howard still seems bitter about being kicked off the Iron Man cast and being reduced to drivel like this.  “I was supposed to be War Machine…!  Damn you, Cheadle!  [cries into hands, eats entire container of Ben and Jerry’s]”

It doesn’t help that the whole film has a weird morality stance throughout, that Farrell’s character will let his buddy with a family survive the gang shootout, because he lost his own family, but then he kills like 25 other people.  Some of which must also have families, right?  Unless he scouted out all of them and made sure that all of them were single, lonely dudes?  I have no idea.  I’m just saying, I’m sure he orphaned a small handful of kids.  HYPOCRITE.

Dead Man Down is the poster child for films being 30 minutes too long.  It’s a nice, simple, dumb, action story that gets completely bogged down with extra nonsense.  Like it wasn’t the worst movie ever made, but I was definitely getting fatigued by the film’s dragged-out nature by the time the third act started.  The final action sequence felt like it wasn’t even storyboarded.  It was nonstop shooting in a mansion until I guess all the characters end up upstairs for a talking scene to close it out.  Ah, the two bad guys end up shooting each other at the exact same time, not harming our protagonists in any way?  How convenient!  Colin Farrell also enters the mansion by driving a SUV through the front door…  I’m happy that method still works.

Let me just put it this way, Dead Man Down is the cinematic equivalent of mediocre string cheese.  It’s not the good Kraft stuff.  It’s not even the Everyday Essential cheap brand you can get at Jewel, because that stuff is still delicious, AND a bargain!  It’s the weird brand you never buy with the CGI cow and the wrong colored cheese on the packaging.  It tastes kinda off, and it doesn’t even pull apart correctly.  It’s a regrettable purchase, and you wish you just spent the $1.50 more on the better string cheese.  Is this possibly the worst food comparison I’ve ever made about a film?  We can debate this for days.

The Dead Man Down of food

One final issue with this film…  the title makes no sense.  So they kill Colin Farrell’s character’s family, and the mobsters thought that he was killed too, but he wasn’t and he plans to kill them now.  So Colin Farrell is the “dead man”, obviously.  But how is he “down”?  If anything, he is highly active and extremely motivated, and very much “up”…  This film should be called Dead Man Rises or something instead.  Revenge of the Dead Man.  OHHH, this one even kinda rhymes:  Dead Man’s Plan…!