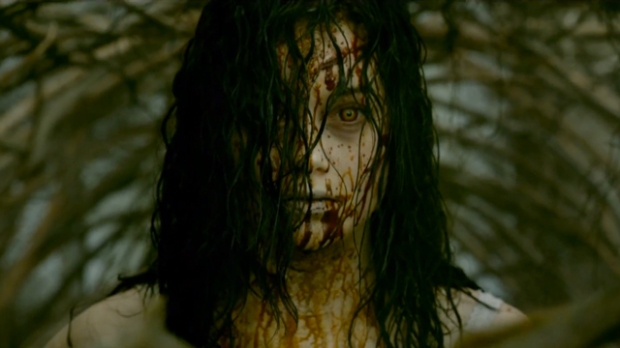 Premise:  It’s the story of a guy who finds a book made of human skin in the dead-cat-covered basement of a dilapidated cabin in the middle of nowhere, which was wrapped in a garbage bag and tied shut with a spool of barbed wire, and every page had text written in blood saying “DON’T READ THIS BOOK FOR ANY REASON OR YOU’LL DIE”, who then proceeds to go out of his way to read the book OUT LOUD to himself, and expects nothing bad to happen.

-It’s a very well shot film.  I think I’d watch this again in the background on HBO next year just to see some of the fantastic cinematography displayed here again.  Good use of color, and a nice handful of really interesting shot choices.  As bleak as Evil Dead ’13 is, I don’t think you can badmouth how good it looked.

-The girl who played Mia (Jane Levy) did a really good job acting as the main character/deadite.  Even in the pre-possession scenes, she was the best actor there.  And then she pretty much nailed every creepy blank stare and tongue flailing psycho moment she was asked to do throughout the rest of the movie.

-The practical effects are all very impressive.  I don’t think it was 100% practical effects, especially on the part when the blonde girl’s arm starts to get possessed, but it seemed like most of it had some pretty inventive make-up and gore effects.

-Also on that note, in terms of sheer wackiness of blood spraying everywhere and gross things happening to people on a consistent basis; Evil Dead ’13 did more than was asked of it.  I know that blood splatter is not a lot of people’s thing, but it’s what the movie was going for, and it fulfilled that part of its goal.

-The very first scene is pretty Raimi-esk and fun, but sadly, it doesn’t carry out throughout the rest of the movie.

-The second half is pretty exciting and full of horror movie good times.  I dug the ending (NO PUN INTENDED).

-Stay tuned after the credits for probably the best five seconds of the whole thing.

-Eric is the dumbest character in the history of horror films for what he did, which I explained in the premise.  He seriously deserved everything that came his way, which turned out to be hilariously non-stop violence.

-The acting, for the most part, was extremely bad.  I think the one thing this movie needed was some very apparent star power (like Bruce Campbell was in the original), and it instead had four of the five actors being as flat and uninteresting as possible.  And the one good note of acting (Jane Levy), as much as I’ve praised her thus far, was still realistically only above average.

-The “character development” scenes before the carnage are flat-out boring.  There’s a difference between setting up a plot and putting the audience to sleep.

-I would have preferred it to be more creepy than gory, or at least a nice mix of the two.  I mean, there’s some creepy imagery, but it’s probably an 80/20 mix of gore over creepiness.  But again, I’m fairly confident that the director wanted that ratio to begin with.

-The final “ultimate” demon that emerges at the end, which was supposed to eventually take over the world or something (?), was super slow and basically ineffective once its leg got cut off.  It was beaten by a crippled 20-year-old girl after a ten minute chase scene.  HOW FRIGHTENING!  (fart noise)

-Basically all the characters acted in the dumbest way possible throughout.  And how many times can that one guy get tricked by the demons into thinking they are no longer demons?  Dude, they aren’t your friends anymore, FIGURE IT OUT.  Once the third person in a matter of hours turned into a noticeable zombie and shot me in the legs with a nail gun, I’d struggle to be like “Oh, I guess you might be alright now because you’re using your normal voice.  Yes, please come closer.”  It just seems like one of those situations where you have to push logic and emotions aside for a few minutes, and take care of business.  It’s like no character in this movie had ever seen a horror movie before.

-Don’t go see this if you are grossed out by needles.

Final Thoughts:  It doesn’t live up to the original in terms of effective horror storytelling, but it surpasses it with the outlandish scenarios.  It’s a gross out movie to the extreme, but it least it put forth an effort to maintain a certain minimum level of tenseness.  But it’s a movie I don’t know if I’d ever actually seek out to watch again.  If I ever had the urge to watch something like Evil Dead ’13, why wouldn’t I just watch the original?  Or better yet, Evil Dead II?  Or Army of Darkness?  Evil Dead ’13 is no more than a mediocre modern horror film disguised as something better through name recognition.  It has a few merits, but it’s nothing to write home about.