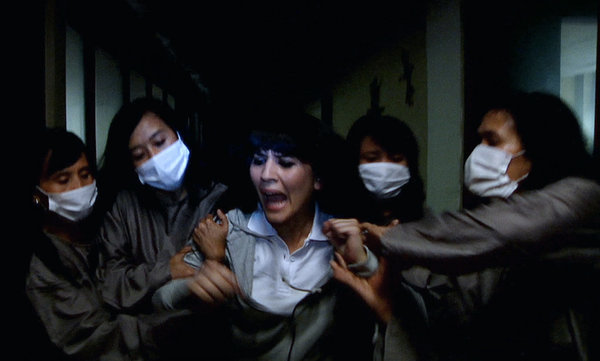 Last year’s V/H/S was an alright viewing experience for horror fans, even if it only had about 2 or 3 great segments, and then the rest were pretty blegh.  It had a fantastic POV party night gone wrong, an incredibly fun haunted house, a mildly creepy vacation tape, an awful slasher set in the woods, the worst thing ever recorded on Skype, and a dumb wraparound segment.  For this year’s sequel, V/H/S 2; there was an epic GoPro segment filled with insanity, a good POV segment about zombies, a terrible POV segment about ocular implants, a cluttered mess about aliens, and a dumb wraparound segment.  And unlike Rex Reed, I actually sat through the entire thing!  Let’s break it down!

Tape 49:  This year’s wraparound segment is more or less the same as the first one’s.  Two investigators go into the house full of haunted (?) VHS tapes (they are actually looking for one of the kids who broke into the house in the first one).  Right when they get there, they open a laptop to see the kid they are looking for in a recorded message.  Instead of playing the entire message, they play it for 30 seconds then stop it to look around.  Then they play it for 30 more seconds, then stop it and walk away.  Considering the final 30 seconds were extremely relevant to the investigator’s safety, they probably should have watched the entire thing right when they got there.  I mean, it was only 90 seconds.  It’s like walking into a murder investigation and seeing a suitcase with the word “CLUE” written on it with blood, then ignoring it until after you’ve walked around the crime scene for a while.  And then, OF COURSE, it ends with a ghost girl walking upside down on her fingertips with her hair covering her face.  SCREW.  OFF.   3 out of 10

Phase I Clinical Trials:  A common problem with these V/H/S segments, and this includes the first film, is that despite the fact that they are all short films, they all frequently have minutes upon minutes of the most mundane, boring daily tasks in them.  Like watching a guy brushing his teeth.  Or going to the bathroom.  It’s stuff that the filmmakers assume we will be interested in, because they are shooting them in a style not commonly used in films…?  Is that the idea…?  Like I’m supposed to be impressed that a 15 minute short has 3 minutes of a guy walking around his apartment not doing anything, and because we’re looking out of his eyes it all the sudden becomes interesting?  I don’t think so.  Anyway, This short was about a guy who gets a new bionic eye put in place of a damaged eye.  But it’s an eye that can see ghosts!  Then he meets a girl who had a hearing aid put in her head that can HEAR the ghosts!  Then some gratuitous nudity, yadda yadda yadda it doesn’t end well for the pair.  Kind of a dragged out concept, and the lead actor was sort of annoying, and the lead actress was ever worse.   4.5 out of 10

A Ride in the Park:  This one actually has a good concept, and one I don’t *think* has been done before.  Basically a guy is riding his bike in the park with a camera on his helmet, and gets bitten by a zombie.  Then the rest of the short is from the “eyes” of a zombie.  I can’t say I’ve ever seen a film from the perspective of the zombie before.  It was average amounts of quality.  There’s some humor in it (thank god), and the ending part gets pretty action packed, but it does suffer in the first half of a lot of “hey here’s a guy riding his bike for two minutes” and “hey, here’s a zombie walking around doing nothing for two minutes”.  Once it was established that he was a zombie, and the novelty of the initial transformation wore off, the pace should have picked up much more.  But overall, this is an an enjoyable zombie short.    7.5 out of 10

Safe Haven:  THIS is the one worth the price of admission.  It begins with a documentary crew getting granted permission to investigate a highly secretive and controversial cult headquarters in Indonesia.  I don’t really want to ruin anything specific that happens in this segment, because it works best not knowing what’s coming next, but trust me, it’s awesome.  It has the perfect amount of insanity, and it’s insanity on a consistently rising level.  Where the other shorts go wrong with showing boring non-moments before the action; Safe Haven actually creates genuine mystery and tension in its first half.  The action escalates into an amazing GoPro-filmed adventure through the weirdest cult compound imaginable.  It’s great.  I would watch V/H/S/ 2 a second time just to see this segment again.  It by all means should have been the final segment, but I suspect it wasn’t chosen as such because it ends on a joke.  And god forbid that this wacky horror anthology could end on a fun note…  MUST.  LEAVE.  BAD.  TASTE.  IN.  VIEWER’S.  MOUTH.   9.5 out of 10

Slumber Party Alien Abduction:  The final segment was a little difficult to gauge.  It actually started off really good, with a kind of coming of age, summer-type story starting to emerge at first, BUT with flashes of aliens.  The underwater alien shot at the beginning was legitimately good.  But then it starts to go downhill at the halfway point, as the camera used to tell the story gets strapped to the back of a dog for most of the short’s duration (yeaaaaaaahhhhhh…), and it just becomes a jumbled mess.  And by jumbled mess I mean that it’s impossible to tell what’s going on.  It’s like all the worst parts of The Blair Witch Project, but at a non-stop pace.  The few times that they calm down and let the audience take a look at what’s going on, the aliens appear to us as slow-moving dudes in cheap alien costumes waving their arms above their heads leisurely, like they were in an Ed Wood movie or something.  Ehhhh.  I appreciate the effort, but the execution could have been much better.  It also leads to the question, if these VHS tapes are supposed to be supernatural, haunted entities; why does one of them confirm the existence of aliens?  Are aliens behind the VHS tapes, or are ghosts?  Or are they working together?  HUH?  WHAT?  WHERE AM I?   6 out of 10

In a better world, Slumber Party Alien Abduction would have went first, Safe Haven would have been last, Phase 1 Clinical Trials would have been thrown out, and they would have just created a better middle VHS tape.  V/H/S 2 is better than the first one overall.  The best segment of the second one is basically a “best of both worlds” mashing of concepts of the two best segments from number one.  Also the worst segment in V/H/S is way worse than the worst segment in V/H/S 2.  But it’s hard to recommend these movies because you get a lot of good and bad.  There’s no doubt you will hate some of it, while enjoying other parts.  I guess that’s an admirable quality; that there’s something for everyone.  BUT I only mean that statement if you’re a horror fan.  My mom wouldn’t enjoy any of V/H/S 2.