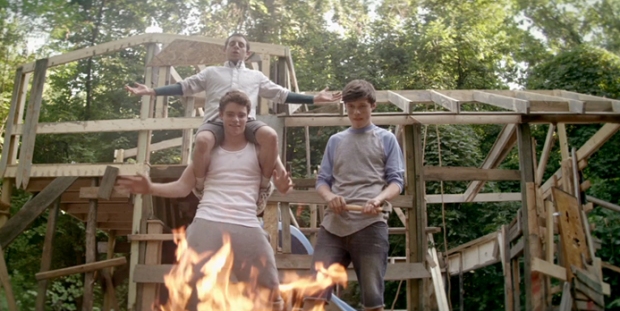 Premise:  Three teenage boys (Joe, Pat, and Biaggio) have less-than-ideal relationships with their parents.  Joe’s dad (Nick Offerman) is a cold, hard-worker type who is rather stern with him for his own good, but have a distance between them since the mom left the picture.  And Pat’s mom (Megan Mullally) is the obsessive, annoying, overly-nice type who embarrasses him at every opportunity, and is giving him hives.  So the two friends decide to build a house in the woods and live there over the summer, without telling their parents.  This weird kid named Biaggio tags along, too.

-I’ve said it a few times before, but I’ll say it again…  If you give me a story about kids learning life lessons over summer vacation, I’M IN.  I don’t think anything triggers my nostalgia quite like that.  What can I say, I had some pretty fantastic summers between the ages of 5 and 15.

-I liked how it jumped right into the story without much fussing around.  It had a few short scenes of establishing the characters, and then the main plot of the film went underway.  I guess it helps that they didn’t have time to mess around much in the beginning, considering how short the movie was (another plus).

-Nick Offerman should play a dad in every movie.  And Megan Mullally (his actual wife) has got to be one of the top five “crazy mom” actresses in Hollywood.  They both played into the kind of roles they are known for playing, but those are both characters I like to see.  Often.  It must have been intimidating to ask Offerman to film the usual “lay on the couch staring at the ceiling” shot that’s in most indie films.

-I enjoyed how the film made fun of the themes it was representing, like the man vs nature mentality that the boys have in their forest home.  They try to hunt for food, but end up failing and just bringing back Boston Market as if they “earned” it or something.

-There are a lot of moments that had me laughing loudly.  When I’m watching movies alone, I tend to just chuckle, even at really funny stuff; but there were three or four moments when I burst out in a boisterous cackle.  Offerman and/or Biaggio were responsible for all of these.  Biaggio’s police interrogation scene was awesome.

-I think it’s a well written movie, dialogue-wise, but it’s sort of lame that the main conflict of the movie was essentially over a girl.  I guess girls do come between 14-year-old boys, but ehhhhhhhhhh, I’ve seen it before in movies, and it didn’t do anything different on that front this time around either.

-Joe is kind of a prickish protagonist.  Then again, I don’t know many 14-year-olds who I would consider not to be somewhat prickish, so I guess it’s realistic.  Still, unpleasant people are unpleasant people.  And shave off that dumb mustache!

-A lot of the film’s structure and editing are based on a sense of randomness.  It works sometimes, but when it was over, and I just looked back at the film as a whole, a lot of flavor was very gratuitously jammed in there.  I wouldn’t say it was forced, but it was technically unneccessary.

The Kings of Summer is *almost* a great movie.  I really wanted it to be a great movie.  But I have to be honest with myself here, and just say it was a really good movie.  I wholeheartedly recommend it as an enjoyable film.  It’s out on DVD/streaming right now.  Wow, the end of this review really fizzled out.  Here, enjoy some wacky text characters in order to go out with a bang: ^(^#*^$@^*)@(^#)%#&@%(

One thought on “Lazy Movie Review: The Kings of Summer”