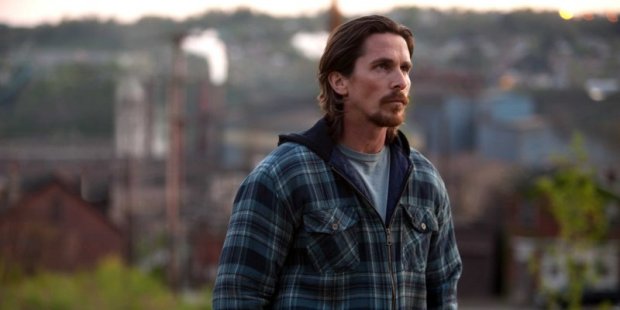 Premise:  Russell (Christian Bale) is a mill worker in Pennsylvania (I think) who has a haphazard mistake occur, and lands himself some prison time.  Meanwhile, his brother Rodney (Casey Affleck) is a former marine who know finds himself struggling to get a job, and without his big brother around to help pay off debts, he tangles himself up in a bare-knuckle boxing ring fronted by a crazy New Jersey redneck named Harlan (Woody Harrelson).  Now old-Batman has to try to find out what happened to new-Batman’s little brother.

-It has some nice cinematography and some clever editing.  At the very least the film tried not to tell the story as straightforward as possible.  It uses some cute parallel editing tricks to try to point out some metaphors that are fairly obvious, but I enjoyed watching it from a technical and stylistic point of view, nonetheless.

-I’ll get to the characters later, but the acting is at least really good.  This is kind of a strange movie in the sense that it has an unoriginal plot and it came out of nowhere, but it drew me in because of a nice crop of A-list talent (well, and I was bored and there was nothing else to go see).

-The Appalachian mountains are an interesting setting to have a movie like this take place in, because it just lends itself to the type of characters the story wanted (lowlifes).  Also, it’s a super creepy place full of terrible people and I would never want to experience it in real life.

-Willem Dafoe has a supporting role, which I didn’t realize until I was in the theater watching the movie, and he was one of the most entertaining side characters.

-A lot of this movie is full of interesting ideas; such as adapting to life after prison, adapting to life after the military, trying to find work in a tough economy, battling with a crazy redneck, etc…  But all of them are just half-thoughts.  The film starts as an intriguing look at the bad things life can throw at you, even without the use of the bare-knuckle boxing angle, but then it just shifts into the Harlan plot halfway through and I forgot the point of showing the hardships in the first half, because now it’s just a movie about fighting hill folk.  I don’t know if I just made sense there?  Let me try to sum it up again…  First half:  Family/economic struggle.  Second half:  Battle against methheads.  I’m not sure either are fully realized storylines, so it hurts the film overall.  There!

-There were a couple of times when I thought that Christian Bale only signed on to this movie so he’d have an excuse to have that rockin’ haircut.

-Russell’s girlfriend Lena is an almost completely useless character.  Not so much in that she makes stupid choices (she didn’t have the chance to), because the main purpose of her is to create unnecessary tension between Russell and the cop looking for his brother, played by Forrest Whitaker, because the cop is now dating Lena post-prison sentence.  Man, when I try to like write out plot points to this movie they make this film seem way more complicated than it actually is.  The cop character and the girlfriend character didn’t even *need* to be in this movie, is what I’m trying to say.  They didn’t add anything but one-note characterizations and a chance to have Whitaker and Zoe Saldana in the movie.

-I could have figured out based simply on the trailer, let alone any given second that Harlan is on the screen in the movie, that he’s an evil, mean dude.  I don’t think he needed to be featured in the opening scene beating up a woman at a drive-in movie to establish who he was, especially since the scene had nothing to do with the story as a whole.  I could have assessed by any other Harlan scene in the movie that he was capable of beating people up for no reason, as he proceeds to do like four more times throughout the film.

-So…  they just stole that ending from Se7en, right?

-Wow, that was one heck of a bad final shot before the credits started rolling.

Final Thoughts:  Had this come out a few months ago, it probably would have made my Most Forgettable Movies of 2013 list from last week.  It’s just kind of a bland, unoriginal movie at its core.  But it has a few scenes that pay off nicely.  It’s one of those movies where I’m happy that I got all the way through it and experienced it at least once, and was able to absorb anything of merit from it, because I never plan on watching it again or recommending it to anyone.  It’s sort of a chore to get through at times.  Maybe watch it for free on Netflix next year and see if you get any more out of it than I did. [cue Pearl Jam song]

2 thoughts on “Lazy Movie Review: Out of the Furnace”