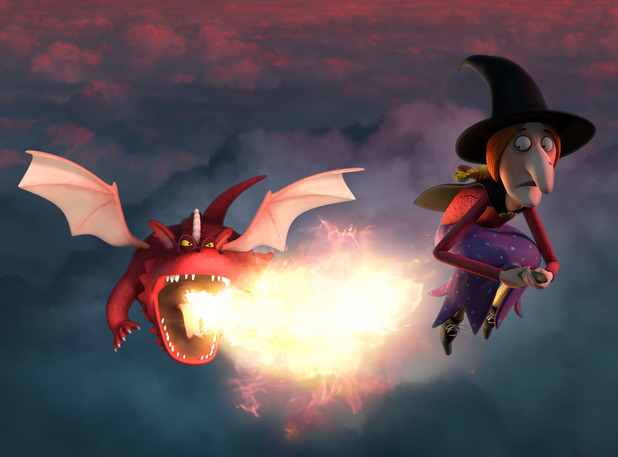 This is my third year in a row going over the Oscar nominated animated short films, and in the previous two years I predicted the correct winners, so I feel like there’s some decent credibility for my cartoon watching building up here.  That will only make it that much more hilarious when I totally get it wrong this year.  Because this time around, surprisingly, not a single entry was terrible, but nothing really stood out as a super clear front-runner either… 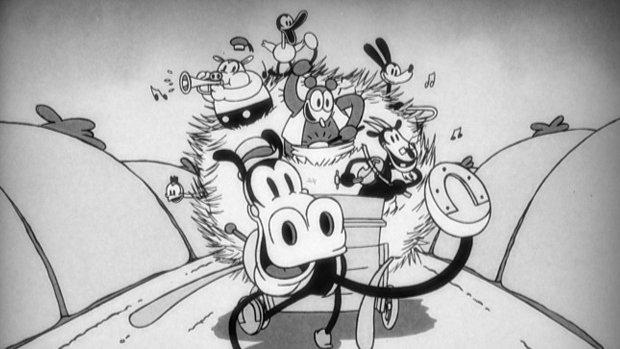 This was a Disney short film about our old friend Mickey Mouse, in full steamboat black and white style, hopping on a horse carriage with his pals, until a bully comes along and tries to start some cartoon violence.  Eventually, the 2D characters break through the theater screen and become full color 3D characters, and they jump back and forth between the two styles all while fighting the bully in a fast paced short that more resembled an episode of Looney Tunes than anything I remember seeing Mickey doing before.

I liked it.  It was fun, and it was so short that the premise didn’t even have a chance to wear out its welcome.  Though, if the iconic characters were stripped away from the production (and let’s be honest, you could have subbed in a batch of generic animal people and it would have been the same), then Get a Horse! would have just been a clever gimmick.  But with Mickey and pals included, it then possibly becomes something more meaningful than it genuinely is.  Still, it’s got some good cartoon mayhem, like a pitchfork in the butt.  Pitchfork in the butt never gets old. 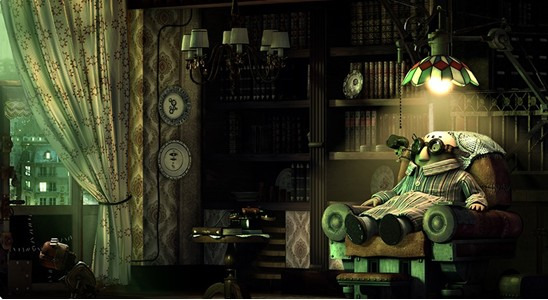 This one took place in an entirely CG, mostly mechanical world, where an inventor with OCD finally steps out of his house in order to save a robot dog that was about to get crushed by a garbage truck.  Then the dog starts to grow bigger and bigger in Hublot’s apartment, until it gets so big that he has to do something drastic to deal with it.

I feel like I’ve seen a dozen of these robotic/steam punk environment animated movies in my life.  So I wasn’t all that impressed to see another.  At least Mr. Hublot used humor to its advantage, and tried to keep the pace going briskly (which it did for the most part).  And the ending would best be described as “cute.”  It’s a harmless little flick.  Nothing special, but fairly enjoyable. 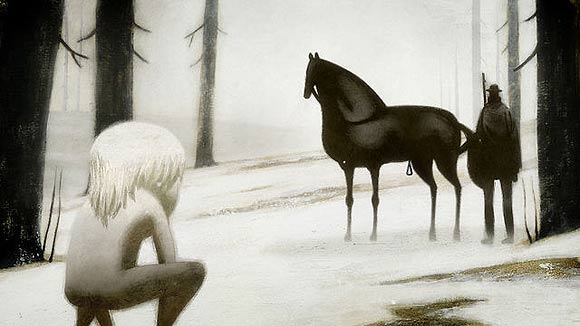 Ah, the token super serious, crudely animated entry into the Animated Short category.  Feral is about a young boy, discovered living in the wild, who is adopted by a hunter and pushed into normal society.  When the boy can’t resist his feral urges in school, he is imprisoned and eventually morphs into some sort of acid trip montage of insane imagery that only the highest of college sophomores could possibly ever understand.

Out of the five nominees, it easily has the most original style.  It’s just not the most original or entertaining story.  Up until the explosion of “HUH?” at the end, it goes pretty much exactly as I was expecting it to.  But it’s still a pretty beautiful short, in an ugly kind of way. 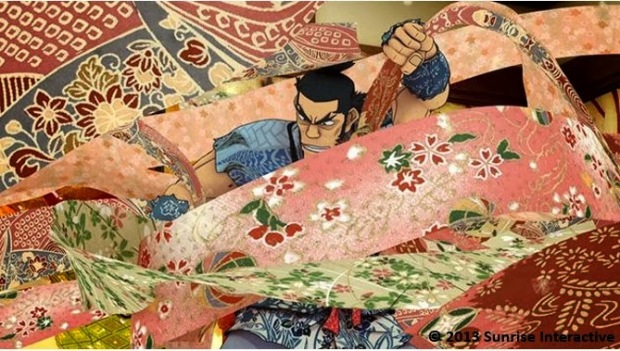 This was about an 18th century repair man, wandering though a storm in a Japanese forest, until he comes across a mysterious cabin, and decides to stay the night until the rain dies down.  While there, he gets haunted by several household *possessions* (like umbrellas and kimonos) who are *possessed* and angry that they are broken and dead, and he tries his best to fix them so they don’t feel bad about being ghosts.  It’s funnier than it sounds.

It was in the style of classic anime, but the main character was a computer animated being (I think…?  Or maybe the whole thing was computer animated…?).  It was a fairly seamless blend of whatever, regardless.  And the story was so freakin’ weird and confusing, that its craziness almost became charming by the end.  I’m not entirely sure if the plot made any sense, but I’ll just take their word on it (JAPAN GONNA JAPAN).  At least the little frog dude cracked me up.  That frog should host a talk show. 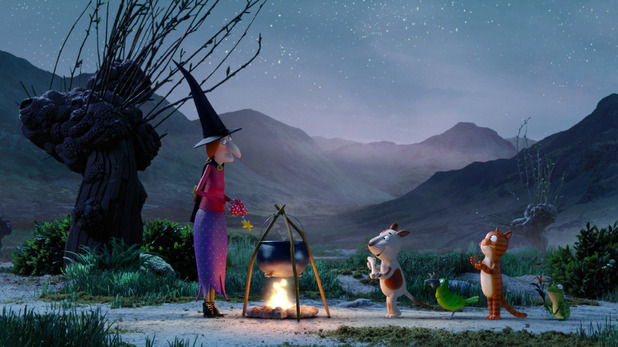 Made by the same British company that made The Gruffalo and The Gruffalo’s Child (a highly commendable short from last year), this is another 30 minute CG short based on a children’s book filled with rhymes.  This one was about a friendly witch who keeps picking up new companions (a cat, dog, bird, etc) to join her on her flying broom because they are out-of-place where they originally came from.  Also, a dragon is hungry and trying to eat her.  TYPICAL WITCH SHIT.

It’s a nice little story for children that teaches values like working together and acceptance.  And it’s cutely written, yet awesomely narrated by Simon Pegg.  He uses the same speech inflection throughout the whole thing that he used at the beginning of The World’s End (“We called it the Beast because she got preeeeeetty haaaaaiiiirry.“)  This was probably the funniest of the five, the best told story of the five, and the most well-rounded of the five.  But it was also the longest of the five, doubling the length of the next longest behind it.  But it does feature the best performance by a cat of all of 2013.  Sorry, Inside Llewyn Davis cat…

“Highly Commendable” (yet not nominated) short films they played as well:

A La Francaise: A hilarious CG animated short about a bunch of entitled chickens walking around a mansion looking ridiculous in French royalty clothing.  It was pretty much perfect, and one of the greatest things I’ve ever seen.  How it didn’t actually get nominated is mind-blowing.  10 out of 10.  Trailer Available Here

The Missing Scarf:  A really slow joke about a squirrel looking for a scarf in the forest, and helping other animals with various increasing problems.  It had the animation of a flash video on the web, and it has a really slow beginning, but the punchline is fantastic.  It also has must-hear narration by George Takei.  Ohhhh myyyyyyy.  7.5 out of 10  (couldn’t find a clip online)

The Blue Umbrella:  That one Pixar short that played before Monsters University about the blue umbrella that is trying to fuck the red umbrella.  8 out of 10  Clip Available Here

Well, Feral and Possessions are way too weird to win.  And Mr. Hublot is too generic to win.  My personal favorite was Room on the Broom, but I think it may have been too blandly animated.  Also, they only considered The Gruffalo’s Child highly commendable last year, and it’s basically the same thing, but with a better story.  So, I want it to win, but realistically I think it will go to Get a Horse!  It has the iconic characters, the clever gimmick, and the quasi-film history lesson that the Academy tends to eat up.  I’ve noticed that you can’t just tell a good story to win this category, you have to do something creatively different than before.  BUT DON’T MAKE IT *TOO* WEIRD. 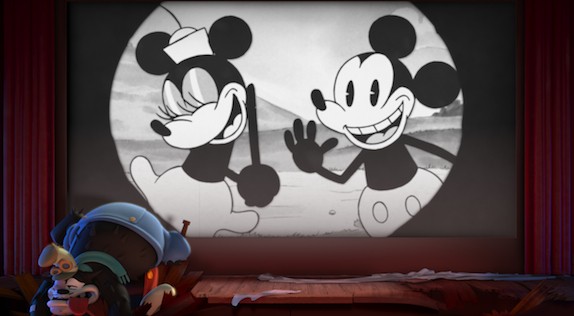