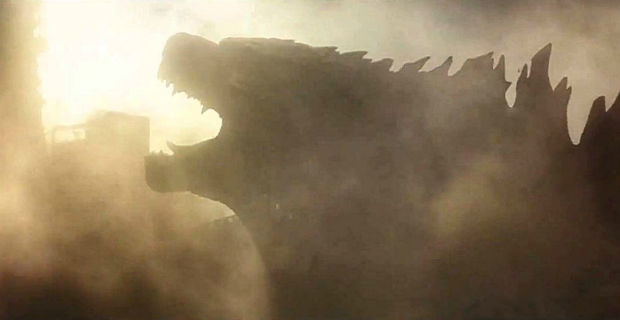 This may very well be one of the greatest “tease” movies in history, if only because the images taunted in our faces are of such grandiose enjoyment.  Zilla ’14 was spectacularly cheap in the way that it would have the monsters get into fighting stance and then cutaway to the next scene without really showing anything.  The first major standoff between Godzilla and the other bug monster thing began with the film’s first Godzilla full body reveal, which was borderline hair-on-arm-raising, pants crappingly great; and then the movie decided to cut away to a shot of a kid watching 15 seconds of highlights of the two monsters fighting on his TV.  There must have been at least four times when they revealed Godzilla like it was the first time we’ve seen him in the movie.

If there’s one definite advantage that Godzilla’s sister film Pacific Rim had over it, it’s that P-Rim showed the monster fights in cartoonishly amazing detail.  We see every hydraulic uppercut and rocket powered kick into those kaiju’s neon blood spitting faces.  In Godzilla, there’s only one fully fleshed out monster fight at the end, and even though it’s great, it would have been nicer to have seen more than one of them.  Again, Godzilla is basically an hour and a half of showing off how cool Godzilla is, and then 30 minutes of awesome fighting.  Pacific Rim was more like, “here’s the opening credits, and HERE’S a big fucking monster.”  Though, the excitement of constantly being teased with the prospect of seeing Godzilla kind of did it for me.  In a way, the feeling of not seeing everything was almost *more* exciting to me than watching something like Guillermo del Toro smashing his CGI action figures against each other.  Is it nuance, maybe?  Perhaps.  Or it could just be lazy filmmaking that requires the audience to fill in the blanks that the director didn’t feel like showing us himself.  At the very least, it felt like the movie was making sweet love to me, with a ton of foreplay, and then at the very end just decided to ram me.  Ram me HARD.  Until it shot blue radiation all up in me.  …Aaaaaaand, I feel like I’m going to regret making that metaphor. 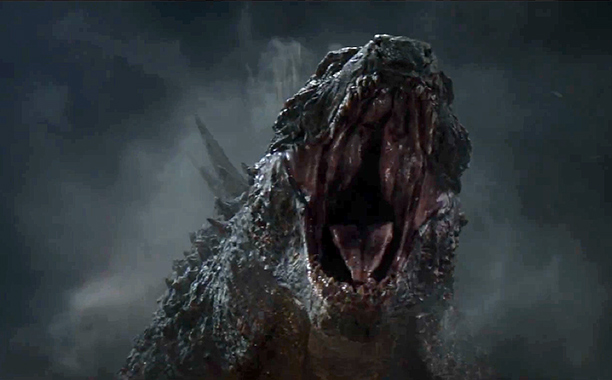 There were some corny moments, however.  Moments that helped give it some of its goofy charm.  Like when Ken Watanabe is revealing his research on the monsters to the army, and he turns toward the camera as the music swells up as he says, “And we call him…  GODZILLA.”  As if this is some kind of important reveal that the audience wouldn’t have been aware of up until then.  Like, really think about it.  We all bought tickets to the new Godzilla movie, and 40 minutes in, they say the word “Godzilla” as if we should be surprised.  It’s just one of those weird movie trope that I’m actually not really all that surprised made it into this film.

I’ve read some other reviews that talked about the actors doing…  …anything?  “This guy was good” “That lady was good.”  I don’t know, other than maybe two moments of Bryan Cranston doing Bryan Cranston things, I can’t say anyone did anything *memorable* with their characters.  Plus, I kind of hate it when a supporting character in a big action movie is a nurse, simply to show us the carnage inside a hospital while the destruction is going on.  If you want to show the hospital, just do it, guy.  I don’t need Elizabeth Olsen to be that bridge.  This movie destroyed every other literal bridge it could get its hands on.  Does Gareth Edwards hate bridges?  An investigation should be started immediately. 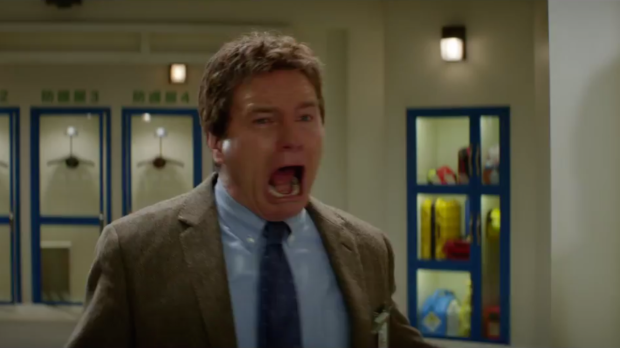 The film is pretty predictable, every moment when the bug monsters are left to their own devices, and about to do something vicious, it’s pretty obvious that Godzilla will show up behind it or near it and surprise all the characters as if they couldn’t hear Godzilla walking up to them.  It’s not as if he was tip-toeing around the city.

One major disappointment of the film was the lack of Godzilla sized snack promotions.  Maybe I just wasn’t looking in the right places, but I was hoping for a TON of oversized Godzilla food and drink items from fast food restaurants, and I didn’t get any.  I distinctly remember back in 2005, I ordered a “King Kong pizza” from Papa Johns, which was an XXL sized pizza with like five types of meat, and it was amazing.  The fact that I didn’t get a two-pound Godzilla cheeseburger with “radioactive green” guacamole on it from anywhere is a societal failure, in my opinion.  If there’s ever a time when I support shallow, soulless Hollywood marketing it’s when oversized food is involved.

But overall, despite everything I may have just criticized it for, I thought the movie was pretty cool.  The cinematography was fantastic, which I’ll mention here since I forgot to earlier.  And if it eventually leads to a Gamera movie, then I’m down.  Gamera was my favorite when I was a kid.  Used to rent Gamera VHS tapes all the time, JUST SAYIN’.