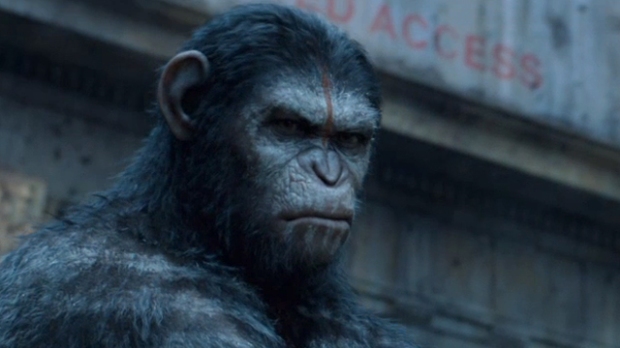 Remember when Mark Wahlberg starred in that terrible remake of Planet of the Apes thirteen years ago?  The one with the conch shell helmets and Apebraham Lincoln?  Let’s just go ahead and remove that from any sort of Ape canon from this point forward.  Also, an ape cannon would be great.  It can either be a cannon built and used by apes, or a cannon that fires apes at people.  Hold up.  STOP.  It’s way too early to get this derailed from the movie at hand…  Focus.

Dawn of the Planet of the Apes takes place 10 years after Rise of the Planet of the Apes, as the apes (still led by Caesar) now have a fully functional society of hundreds in the forest outside of San Fransisco.  Through a chance encounter, a lingering group of humans run into the ape colony, and a fragile alliance must be formed in order for the humans to get the electrical power they so desperately need to utilize their iPads and JC Penny Cake Pop makers.  Apes don’t need cake pops.  That’s what makes them scary. 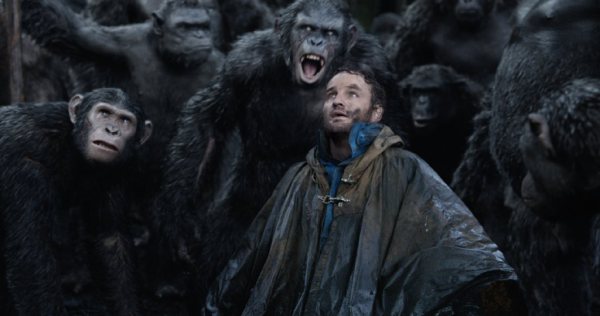 I’m happy that I rewatched “Rise” the night before I saw this, as I forgot about several elements and characters.  Long gone is James Franco, who is now presumed dead; but still around are Koba the evil-looking ape, Rocket the bald ape, and Maurice the wise, friendly orangutan.  Luckily, they all have distinguishing physical features, otherwise I wouldn’t be able to tell anyone apart.  If Caesar’s son didn’t have battle wounds, and his wife didn’t have head jewelry, I would have wondered why Caesar was always giving these two random apes special treatment?  Does that make me ape-ist?  Because one of my best friends growing up was an ape.  My third cousin married an ape three years ago.  I’m totally not an ape-ist…  Anyway, despite the fact that a lot of them looked identical, the apes in the film were incredibly seamless in their environment.  If there was ever a grand, crowning achievement in making fake apes look awesome on film, Dawn of the Planet of the Apes gets the Golden Banana.

In fact, a lot of the visuals and camera work of this film were flat-out incredible.  Ohhhhh, that tank shot!  That was awesome.  And I know everyone jokingly touts this as the movie with the “apes on horses shooting machine guns”, but damn if I won’t admit it: that shot of that ape riding his horse through a wall of fire while firing two machine guns made my brain release those rare endorphins that I only get when I think about skeleton wizards having a lightning fight or a shark riding a bear that’s riding another shark. 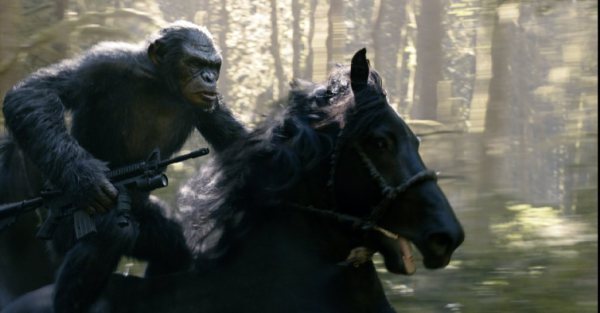 This film has bona-fide moments.  And lots of them.  And these moments are amplified by the music.  And that’s aside from that one great moment of peace when the humans hear diegetic music for the first time in probably 8 years, but Michael Giacchino’s score was one of the best I’ve heard in a while.  Couple that with some pretty raw emotion translated brilliantly through the aid of CG monkey faces, and Dawn of the Planet of the Apes hits you on nearly every sensory level.  If only they could have made this movie accurately smell like Caesar’s Bananaville, which I imagine has an aroma much like Tropic World at Brookfield Zoo, only times about 1000.  I don’t think the ALZ-113 drug made the apes smart enough to develop indoor plumbing.  YET.

Perhaps one of the biggest criticisms of the thematic elements of this movie is that both sides of the ape/human are able to coexist, except for one person from each side being a jerk.  On the ape side, it makes sense why that one ape would turn to villainy against the humans, with a pretty convincing scene pointing out his personal grievances.  On the human front, it more or less boiled down to an uneducated dolt with a near bi-polar level of rage issues who hates apes because the human-named virus “Simian Flu” wiped out most of humanity.  “Simian Flu killed everyone off, the apes are evil!”  Which is followed by a regular person informing him that it was a human drug that started the virus, and it’s just a name.  Which seems ridiculous until you realize that there are people like this all around us in real life already.  “If global *WARM*ing is real, then why is it so *COLD* outside, Mr. Science…?”  These kind of dumb, negative, one-sided, mean people didn’t bother me that much, though, because there was contrarily also one person on each side that tried to hold that small string of peace together as long as they could because they saw the good that the other side was capable of.  Jerks vs. reasonable people.  You can probably guess who wins in the long run. 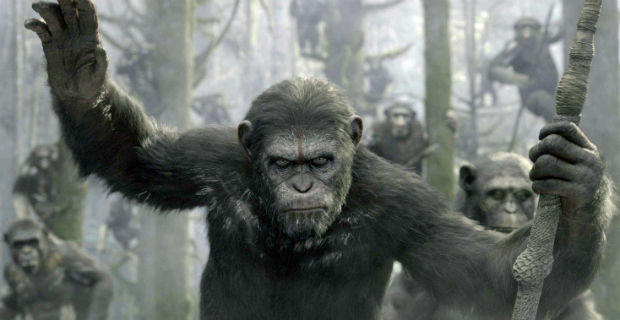 But the fact that this film has themes at all makes it better summer blockbuster fare than, say, Transformers or something.  Which, if you noticed, is also about humans trying to coexist with an intrusive, stronger non-human element.  But if you want to attempt to tell me a strong theme or an emotional moment in Trans4mers, I’d love to hear it so that I can probably laugh in your face.  And guess what?  They are both summer tent pole movies with lots of guns and explosions.  But only *one* of them had a decent screenplay and a director who cared about making a lasting product.  If anything, Dawn of the Planet of the Apes proves that we don’t *need* things like Bay’s robots as go-to summer films, when the choice to make *good* crazy special effects films is a viable option.  And, I mean, it’s not like DOTPOTA (why haven’t I been writing it like that this whole review…?) is some pinky-extended-while-drinking-$200-wine type of high-class film; it’s about talking monkeys creating a treetop village in California.

I enjoyed DOTPOTA better than ROTPOTA, and I liked ROTPOTA plenty.  In my ROTPOTA review, I believe I said that it didn’t even need the POTA title to function successfully; but with the DOTPOTA, it extends the story of ROTPOTA, giving characters like Caesar and Koba backstories that they use as driving emotional forces in the sequel.  Now this series is actually shaping into the POTA universe and making sense.  I like really, really liked this movie, and probably would have sat through another hour of it.  I’m looking forward to what our (future) poo-throwing overlords end up doing next.  War of the Planet of the Apes?  Genesis of the Planet of the Apes?  Eroticizing of the Planet of the Apes?  Ewwww.  Hey, I’M NOT AN APE-IST!!!  I JUST DON’T WANT TO SEE THAT.

One thought on “Movie Review: Dawn of the Planet of the Apes”