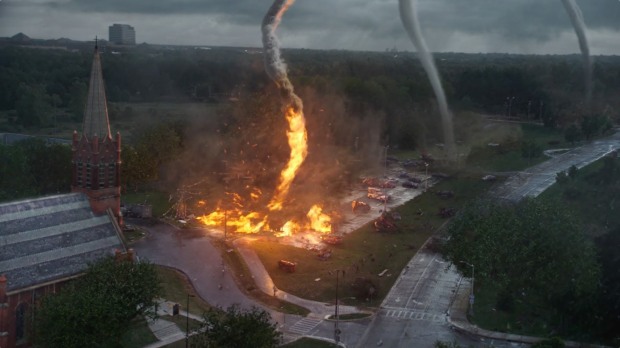 Premise: Twister ‘14 but with no Helen Hunt and worse camera work! Same villain though: that dastardly Wind! Boy, do I hate wind. Always drying my eyes out when I have my car windows down, or almost knocking my hat off when I’m walking somewhere… And also occasionally destroying a town completely, while ruining hundreds of peoples’ lives in the process, for seemingly no reason. BUT ALSO THE HAT THING.

-The biggest selling point is obviously the action scenes, and they deliver for the most part. There’s some cool shots of destruction, which feels somewhat wrong to praise, considering tornados are real and actually destroy things all the time. But if you make yourself an empty, emotionless monster, you will find the special effects kinda cool.

-Always love seeing Matt Walsh in things (who I’ve enjoyed since Upright Citizens Brigade, but most people likely know now from Veep) and he’s the borderline main character in this tornado movie for some reason. There’s also one legitimate “moment” in this movie (which I was surprised to see) and Walsh is big part of it.

-It was a tornado movie that wasn’t made by SyFy Channel.

-This was a movie that completely, literally encompassed “shit flying at the screen” more than any other film possibly could, yet they resisted the urge to make it a crappy 3D poopfest and charge me three extra dollars.  That’s restraint.  I thank you, movie producer.

-Much like that half-found footage cop movie from a year or two ago, End of Watch, Into the Storm has no idea what style of movie it wants to be.  There are like four different styles of shooting going on here, and there is no way of justifying why some things are found footage and other parts are clearly Hollywood camerawork.  Either commit to one or the other, or just do the Hollywood thing, with maaaaaaybe one scene in found footage style.  You can’t just randomly have every third scene be intercut with Hollywood action footage.  And while at least in this movie they attempt to justify the sum of the footage, by having characters at the end of the film give testimonials as to how the footage we just saw will help save lives in the future or something, and preserve the memories of the fallen; it still doesn’t totally make sense.  So, this is supposed to be a collection of everyone’s footage into a documentary, then?  And the fact that they blatantly mention the cameras that everyone seems to be holding at all times (“Put down that camera!”  “Don’t stop shooting!”  “Did you get that shot?!”), it appears as if they clearly wanted you to think that this was a found footage film more than anything else.  So, ok…  Then who took the aerial shots of the buses driving through the storm?  Or that one shot from the perspective of the tornado looking down at the people who are looking back up at the tornado?  It doesn’t make sense if you think about it *at all*, and I assume the director just shrugged and said, “Who cares?  Go away!” when asked the thought process behind his camera choices.

Here, here’s a perfect example of how little they cared about making *any* sense with the cinematography:  Two teens are trapped in a seemingly deadly situation, and they start filming these emotional “last words” video kinda things right to the camera, to preserve their final thoughts and say “I love you” to their parents and whatnot.  They even pass the shot off to the other kid when the first one finishes, so it is 100% evident that the characters are supposed to be talking into a camera WITHIN THE FILM.  Then, in the scene following it when someone else shows up to the location, the trapped kid’s big video camera is clearly outside of where they were trapped, and in the scene before the last word videos both of their phones stopped working. Thus, no camera phones. So, uh, what were they filming those videos on exactly?

And then in the next scene one of them knocks their phone into the water, and now there is a camera angle looking upward, from underwater, at the two kids, as if the phone (which was broken a scene ago, remember) can now somehow capture footage of them.  Even if the phone was in working condition beforehand (IT WASN’T), anyone who has ever accidentally left their iPhone in their pants pocket which was put into a washing machine will tell you that that phone ain’t recording shit underwater.  INTO THE STORM’S CAMERA LOGIC HAS NO BOUNDS.

When it comes down to it, this movie was just shot in the laziest way possible in order to tell this story conveniently, even at the cost of being horribly and stupidly inconsistent.  Either shoot a found footage film all the way, or don’t bother trying.  Going halfway makes it look stupid.  But, ya know, I’m sure if I asked all the smiling people who left the theater walking around me what they thought of the camera inconsistencies in the movie, they’d say something along the lines of “Who cares?  Go away!”

-This is also a Hollywood movie that uses lower thirds to introduce the characters, even during scenes that are not part of the “documentary” style footage.  What?

-Lori from the Walking Dead is in this, and she has the worst line read in the film: [said with no enthusiasm, rushed, and under her breath] “Oh shit.  It’s heading for the school.”  She also directly blames a character for the death of another character right to his face, as if that guy morphed into a fire tornado and burned a guy to death himself.  Here’s a tip: if you see a tornado made of fire barreling towards you; you don’t just stand there, slack -jawed in amazement…  You run the other way.  Regardless of what anyone else has instructed you to do to fulfill your occupational duties, a fire tornado should be the line you draw in the sand.  Not going in the opposite direction of a fire tornado is nobody’s fault but yours.  Lori dragging anyone else into that guilt just continues to prove why Lori is the worst.  Also, do you remember Prison Break?  She slowed that show down, too.

-“There are multiple tornado warnings for our area today?  Let’s continue to hold this graduation ceremony outside.”  -The worst principal of all time.

-Since I moved earlier this year, the closest theater to me is an AMC, so that’s where I go all the time now.  But last week (for Boyhood), I went to a (further away) Marcus theater and it was so much better than AMC’s crappy seats and weird corporate branding.  So this week, as I returned to the AMC, I got reminded of just how much nicer it is to watch a movie without all of the AMC pre-show red ball characters being shoved in my face.  I fucking hate those things; they’re the worst. They are the laziest corporate mascot since the 7-UP Cool Spot, but at least that dude had radical sunglasses and a Sega Genesis video game.

“We need a mascot to distinguish our theater company from the rest, and make us stand out!  Something that will blow people’s minds!”

“Well, the AMC text is in a red circle, so how about we give that circle a mouth?”

“And we can make them annoying as hell.”

“Can we air four of these dumb ads for nothing in front of each movie?”

Final Thoughts:  I also saw Guardians of the Galaxy for a second time this weekend. You should probably just do that instead of seeing this.

2 thoughts on “Lazy Movie Review: Into the Storm”