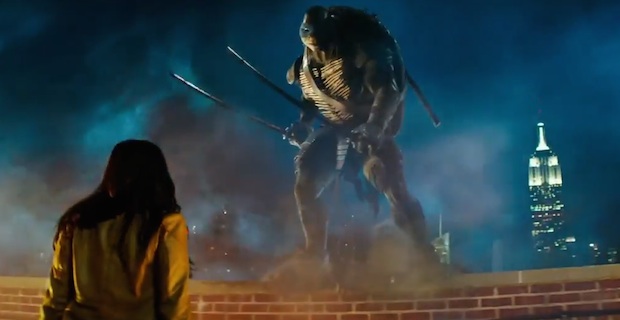 Premise:  The Ninja Turtles are back!  And so are weird expectations and nostalgic disappointment; two of the worst villains the Turtles have ever had to fight.  They don’t even wear costumes.

-I thought the action was perfectly fine.  Especially the “sliding down the snowy mountain” sequence, which had the Turtles working together with their differing skill sets and weapons in a fun and exciting way.  Listen, if that scene didn’t suffice your expectations of what crazy Ninja Turtles action should look like, I’m not sure *anything* would please you.

-They basically kept the original personalities of the Turtles in tact.  Leo is still the leader, Don is the inventor/nerd, Raph is cool but rude, and Mike is party dude.  I guess the only tweaks were to make Leo less of a wet blanket, and include him in more of the fun than the original movies ever did; and then to make Mike less of a stoner surfer type guy, and more of a horny surfer type guy.  Seriously, I’ve never seen a 7-foot turtle try to fuck a white lady as much as I did during those two hours.  And I see 7-foot Turtles ALL the time (it’s a psychological condition).

-I’ve kind of always had a negative attitude towards Megan Fox for her entire career based not just on picking horrible movies to be in, but in listening/reading to interviews with her over the years, and being subjected to her overreaching opinions and moderately large ego issues.  But it seems like she’s finally simmered down, and for possibly the first time ever, I didn’t hate her in a movie.  She did a fine job as April O’Neil.  And she even wore a yellow jacket!  There’s still something going on with her lips, where it seems like her mouth can never fully close, but at least I’m no longer cringing at every line read.  There was maybe even a moment or two where she had decent comedic timing, as well.

-The movie as a whole was pretty funny, I thought.  My fears of this being a “gritty” Turtles remake were thankfully shot down.  Overall, it’s a pretty silly movie, filled with plenty of (chuckle-worthy) jokes in every scene involving the Turtles.

-The inclusion of Will Arnett as a random comic relief character was a wise choice.  He actually made me care about a human character in a Ninja Turtles movie, which is impressive.  There’s also a really subtle, hilarious Arrested Development mustard and parmesan cheese reference inserted into a scene.

-Shredder is exactly what he’s supposed to be: a really tall ninja guy who has knives on his arms.

-The first 20 minutes could have been more entertaining.

-That’s not how gravity and momentum work…

-A lot of the action is dumbed down for convenience, like when someone literally pressed a giant button on a computer screen that said “PRESS FOR ADRENALINE INJECTION”, or when people just mash haphazardly at keyboards until it says “TIMER STOPPED” really large on the monitor.  Given that this is a movie for children, I guess it’s acceptable.  Wait, why are we criticizing a Ninja Turtles movie for not having realistic computer technology, again?

-The CGI on the Turtles (and Splinter) aren’t exactly amazing.  I mean, they are pretty detailed and give some nice differentiating character traits, but it never felt like they were truly real creatures in the real world, like Gollum or the Planet of the Apes apes.  They looked very computer generated, is what I’m trying to say.  Especially Splinter, who I didn’t think had the best character design.

-I don’t think the villain’s plan to poison the city and then miraculously sell them the antidote, WHICH HE HAPPENS TO HAVE, would go over as smoothly as he would have liked.  I *think* people would have been able to see right through that.  But, ya know, whatever.  It was an alright kinda crappy/generic first villain to introduce anyone new to the series.  But next time around, the Foot Clan should just take some green Mutagen (be real: it’s ooze) to the Bronx Zoo and create Beebop and Rocksteady, have Baxter Stockman turn into a fly, or most awesomely, introduce Dimension X so we can have Usagi Yojimbo, Krang, Slash, and an army of rock people led by General Traag.  If I don’t see a freakin’ Technodrome in a movie with a giant eyeball on top before I die, I will be spinning in my grave.  At the very least, if they want to keep it New Yorky, they can cast Bryan Cranston as The Rat King.  Has anyone who’s ever made a Ninja Turtles movie ever watched the cartoon or seen the action figures…?!  ACK!

Final Thoughts:  I feel like this movie requires a few different scores:

If you’re a cynical nerd who criticizes everything about this because it doesn’t match your perfect 1993 Ninja Turtles fantasy, and it’s such an overpowering negative feeling that’s boiling inside you that you can’t let anything go from the new origin story to their nose-holes to the fact that the Foot Clan uses machine guns now – 4.5 out of 10

As a children’s movie, first and foremost, which is kind of what it’s supposed to be; that was also nice enough to throw a couple handfuls of fan service your way anyway even though they certainly didn’t *have* to – 8.5 out of 10

In comparison to the campy, weird, original trilogy which doesn’t really hold up that well nowadays (let’s be honest) – 8 out of 10

When you think about what this series *could* have been if you included the insane amount of stupid characters from the cartoon, video games, and toy lines – 2 out of 10

If, somehow, this was the first Ninja Turtles experience you’ve EVER had – 6.5 out of 10

My official, honest score of the film, coming from a guy who has loved the Ninja Turtles since I was a kid, based mostly on how entertained I was through the whole experience – 7.5 out of 10

And now I will close this out with the 10 best (which could also mean worst) lines of the original toy series which put the Turtles in some pretty amazing situations:

I think it would be pretty unfair to allow mutant turtles to participate in our sporting events.  I owned the four in the middle.

I’m sure they made plenty of money off of these from Grandmas who knew their grandkids liked the Ninja Turtles, but weren’t sure which one to get them for their birthday.  I had the Magician Raph (who had a pop up rabbit in his top hat) and the Generic Birthday Leo (who had a kazoo built into the back of his shell).

Just a random trip to the beach, I guess…  The only one of these I had was the Volleyball Don one.  I remember you could fill his backpack up with water and squirt people through his teeth, for some reason.

Undercover detectives, or serial dick flashers?  YOU DECIDE.  I had the Don of this set.

These were pretty great, yet I only owned the semi-racist Mexican Michaelangelo.

I only had the Punk Rock Don, but holy shit, how I wish I had the Hip Hop Mike in my possession right now.  That’s a thing of beauty.

These were all awesome and I owned all four of them, and they all glowed in the dark.

I never knew this was a set, but I am thoroughly impressed.

BEST CROSS MARKETING EVER.  I think I had the Leo and the Raph.

I never owned this one, and I wonder why *anyone* would own this one.  I like to imagine the look on the kid’s face who got this for Christmas one year.  Seriously, Farmer Don?  How do you even play with this toy?  “Don, let’s go take down the Technodrome!”  “Can’t…  Got corn ta’ tend to…  And those cows won’t milk themselves…”  How I wish I could have worked for Playmates toy company in the 90’s.  I could have given them so many more ideas!  Hospital Turtles!  Construction Turtles!  Scientist Turtles!  Food Service Manager Turtles!