Ya know, it’s kind of hard to continue to keep a steady flow of content flowing for this unpaid, time-exhausting hobby of writing new movie reviews for a small time crappy blog, when there aren’t any new movies ever coming out worth seeing…  There’s been about four or five good movies so far this year, but then on the weekends when nothing exciting comes out, I just have no desire to subject myself to the drivel that’s getting pooped into the AMC.  In years past I would have, for sure.  But lately now I seem too busy to spend my time even writing a scathing joke review of Clint Eastwood’s son’s Nicholas Sparks movie.  Oh well.  I blame Josh Gad for all of this.  I don’t think that’s justified in any way, but it just feels right.

Anyway, what this has come to, because I don’t want to pay $10 to see something I know will be boring, is that I’m going to review the 1987 detective movie Angel Heart.  Why?  Because it was on Encore as I was flipping through the channel guide, and the description sounded interesting.  I didn’t even know it existed before yesterday.  So…  There’s really no *good* reason for me to be reviewing it.  But here we are….  …And there you probably went…

Angel Heart is about a New York private eye in 1955 named Harry Angel (Mickey Rourke), who because this is a movie from 1987, can get away with being named Detective Harry Angel in a movie called Angel Heart.  It’s things like this that paved the way for Tyler Perry’s movie character names, folks.  So Angel meets with a devilish guy named Louis Cypher (Robert De Niro) with long fingernails and an on-point beard, and hires Harry to locate a missing business partner.  At one point, De Niro eats a hard-boiled egg really creepily while making intense eye contact with Rourke.  It was great.  So the story then moves from clue to clue until Angel gets to New Orleans and gets sort of tangled up in some voodoo stuff and Lisa Bonet (19-years-old and fresh off The Cosby Show).  I could probably do 500 more words just giving a straightforward description of the plot, because it’s just non stop investigation.  Pretty memorable conclusion, too.  Let me just end this paragraph by saying there’s a character named Toots Sweet, and he’s played by a real guy named Brownie McGhee.  Those are just two amazing names, right there.

I don’t really think I’ve seen too many movies with Mickey Rourke.  At least not old ones.  I was kind of introduced to him as the leathery bag of weird muscles we know today.  I think it was only a few years ago that I saw The Pope of Greenwich Village (which was pretty good), and in that (and Angel Heart), it’s kind of crazy how good of a young talent the guy seemed.  I’m obviously no Rourke-ologist, but I’m interested to read about how such a handsome, dynamic fellow ended up becoming the freak he is today.  I’m going to assume drugs, because that’s an easy assumption.

It’s also kind of cool to see Robert De Niro in this because he’s an even *more* dynamic force from those decades, and I enjoy seeing him in this small, who-gives-a-crap role.  I’m not sure if it’s how it was back in ’87, but the whole time I was like, “Hey, there’s Bobby De Niro in a random voodoo movie!”.  On a side note, I wouldn’t be surprised if De Niro only got casted and/or took the role because he still had his awesome beard from The Mission.  The beard kind of makes the character. 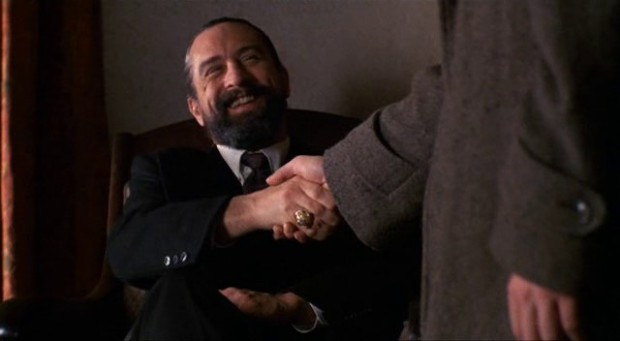 There’s plenty of really good cinematography throughout, and the story seems to move at a decent pace.  There’s some fluff that could have been cut for sure, but it doesn’t totally hurt the movie.  [quietly coughs into hand] [looks around the room, desperately seeking something else to talk about]

Oh!  I looked up some fun facts on Wikipedia, because I felt like it, and here’s what I learned.  I guess Lisa Bonet had a much raunchier sex scene than the already raunchy one in the movie that had to be cut down to avoid an X rating.  Neat.  The movie only made $17 million at the box office, and had a $17 million budget, so it broke even.  Cool.  And the filmmakers chose to shoot a bunch of this movie in New Orleans despite the book it’s based on taking place in entirely in New York.  Probably because of the proximity to jambalaya.  Yeah, that’s it for sure.

This was, uhhhh, a movie that I watched, and didn’t really hate, or whatever.  I don’t see why I would recommend anyone a movie this random; but yeah, I guess you can watch it if you want.  Live your dreams, bro.

Now, when does Age of Ultron and Mad Max come out again?  I doubt I’ll have a new movie to watch this weekend, either.  Paul Blart 2 is the big draw this Friday.  Wow, how magnificently crappy.  March/April 2015 sucked for movies on a catastrophic level, you guys.