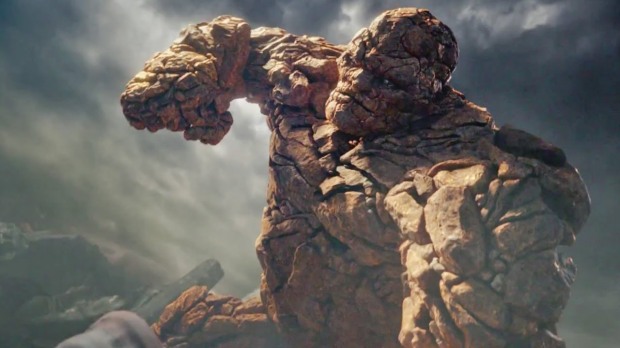 I’m gonna be 100% honest with you, I kind of didn’t hate Fantastic Four.  I was relatively entertained for most of it, and I went into it without really having any expectations, good or bad, and came away somewhere in the middle spectrum of entertainment.  “That was alright,” was my expert analysis right after I saw it.  Want another brilliantly insightful, meaty tidbit of dissection from my brain in the parking lot?  “I wasn’t bored.”  Wow, what a ringing endorsement!

However, as the days have passed since I saw it, it started to slowly leave a poor taste in my mouth.  Once the initial dazzle of seeing a pretty good CGI version of the Thing wore off, the realization set in that perhaps I was also looking at Kate Mara wearing a terrible blonde wig in the second half of the movie for some reason in the same movie.  Do they give out awards for poor makeup and hairstyling? [high fives all the ladies at the hair salon]  Or like, as great as the scene was with the Thing initially struggling to shape into human form, desperately yelling for his friend to help him just out of reach; there was, ya know, the entire ending that canceled out all of that good will.  I don’t know what the deal was with this movie?

I did go to Denny’s, however, and ordered the Human Torch Skillet, and I would order it again if it wasn’t just a promotional item.  It was spicy, and hearty, and the five pepper sauce they used was really delicious.  Sorry, but you know how I feel about promotional food synergy; it’s simply amazing.  If I don’t get an Everest blizzard from DQ in September or a Crimson Peak ghost pepper burger from Chile’s in October; it’s gonna be clobberin’ time!  See, that’s a line from the movie I’m currently reviewing.  Gotta make sure to bring things back to where I started after a tangent.  #moviereviewing101

I thought that there was actually a lot to like about Fantastic Four.  The characters all have different motives and personalities, and the film tries its darndest to give them some dimension (it sort of succeeds, at least in the realm of multiple characters in an origin story film).  Doctor Doom walking around literally blowing up people’s heads with his mind (that’s telekinesis, Kyle!) was one of the better scenes in any movie this year.  And, I don’t care who thought otherwise, I was very much invested in the first two-thirds of the movie, and all the science fiction, teleportation developing, young hot shots trying to build something cool portion of the movie.  I totally enjoyed that stuff.  It was neat.

The disconnect with the me, and pretty much the entire rest of the world, happens right after that.  Once the characters get their powers, the movie becomes an overly rushed, non-spectacular I-don’t-know-what.  The Fantastic Four fighting team is really only in this movie and working together for about seven minutes.  It felt like a movie that kind of knew what it was doing for a while there, and then it just collapsed on its own poor decision-making.  I’m not sure whose fault that is, whether it was director Josh Trank’s, or the meddling Fox studio heads’, or what?  If you watch the movie, and then rewatch the trailers, it looks like there were entire, huge sequences shot that never made it into the final cut of the movie.  Stuff like this Tweet indicate that we’ll probably never really know what the real deal is:

Anyway, the last third of this movie is irredeemably dumb.  Doctor Doom’s motives, his strength, the Four’s capability to handle the ten minute threat at the end of the film by merely punching things; none of it really makes sense.  You question things like why Doom must destroy the Earth randomly for no reason, and also why he doesn’t merely explode Miles Teller’s head like we know he’s capable of from the previous scene?  Also, what is the glowing green goop that gave them their powers?  Is it the same ooze that turned the turtles into teenage mutant ninja ones?  They spend literally zero seconds of screen time explaining the ooze that is the catalyst for the entire premise of the franchise.

And what was with the last scene?  Was that shot as a joke?  That had the cornball nature of a much, much sillier movie.  I don’t know if you want this spoiled for you, but it basically ends with a “WELL, WHAT SHOULD WE CALL OURSELVES?” joke that felt so out-of-place with the previous 95 minutes.  It was like the director of the other Fantastic Four movies stepped in to direct a cameo scene at the end of the film.  Not Oley Sassone / Roger Corman though, they probably would have done it funnier; I mean the guy who went on to direct Ride Along.  And Ride Along 2.

Despite it’s indefensible flaws from whatever level, I don’t think it’s as enormous a trainwreck as the 9% on Rotten Tomatoes would have you believe.  I mean, it kind of makes sense to get the 9%, as even I’m giving it an overall negative review right here, and so have over a hundred other critics, but it’s not like I’m giving it a 2 out of 10 or something, and I doubt most of those people did either.  And some of the really bad reviews I’ve read feel like they’re just piling onto the current easy target.  But in reality, Fantastic Four is just kind of blandly insignificant.  A disappointing meh.  A thundering “huh?”.  But I wouldn’t go as far as to say that it’s a movie that’s only 9% worthwhile, as some may misconstrue the Rotten Tomatoes score.  I think that score is better translated into the sound of a hundred people murmuring “Uh, okaaaaay?  That was it?“.

I’ll throw it to you, Immortan Joe.